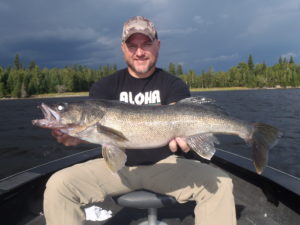 It’s fall weather here on Lac Seul this week and that means conditions are changeable. We’re used to big weather changes day to day. During most fall weeks we’ll see grey days, sunny days, calm days, windy days, and everything in between. What’s a little unusual for us to see is the weather go from grey and calm to sunny and windy in one day. What’s even more unusual is for the weather to have that kind of change almost every day of the week, and sometimes twice or more in a day. That’s what we saw this week and it led to walleye bites as unstable as the weather.

On a more normal week the highlights of most guide’s daily reports would be the hot spot or two where they caught their fish that day. This week the trend for many of our successful boats was to spend their days collecting fish a half dozen or so at a time from multiple spots each day. There were some of those multiple weather change days where it seemed like no spots on the lake produced more than a half a dozen fish for the sheet, but there were always some boats that were able to pick up a pattern early in the day, keep in motion, and visit enough spots to make up the numbers.

The average daily guide sheet this week listed 25 walleye over 18 inches, and as a group we boated 22 walleye over 27 inches, with 8 over 28, and 3 over 29 inches. That’s on the low side for both total volume and big fish compared to an average week here, but with three fish over 29 inches it’s safe to say the top end was still there. For the boats that got a win patience was the key to success this week. Anglers willing to devote their time to known big fish locations, and wait through weather changes and patchy bites even if the catch rate was low, were often the ones to boat a trophy that day. Almost all the big walleye were caught using jigs and minnows fished tight to well defined structure. The big fish weren’t just on “the spot” this week, they were on the “spot on the spot”.

There was almost zero time devoted to pike fishing by our anglers this week, those who did reported good action but very little size. Some big pike were jigged up from deep walleye spots, leading us to guess that the unsettled weather held the big pike deep this week.

A guide’s perspective: I’m a big believer in fishing aggressively, but this week you had to be smart about when to be aggressive. It was definitely not a week to “run and gun” – it was awfully easy to get caught chasing better, easier, faster bites all over the lake when the right answer was to capitalize on the bites you had already found.