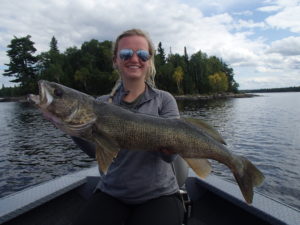 I had an important email conversation with one of my group leaders this past week and it included a discussion about stats.  He made the point that numbers are important and should be analyzed critically.  I agreed, but countered that sometimes the numbers don’t tell the whole story.

Those numbers make it sound like fishing was easy and awesome.  In reality, it was great at times, challenging at others, and occasionally, flat out bad.  I wrote about a depth separation for populations of walleyes in the past few weeks, and that trend has continued, but the speed at which those groups have shifted has been a surprise.   There are no real trends to talk about tonight.  During the past week, we have had hot bites for big walleyes in 35 ft., 25 ft., and in 15 ft. of water.    Main lake sand produced well and then it didn’t.  Same goes for Main lake rock.  There were times when “eaters” were hard to find and there were days when big fish simply disappeared from a spot.

The reality is that we all fished a great number of spots this past week and used our full spectrum of guiding techniques and tools to catch them.  The Great Gulp Nemesis crisis has been averted with the arrival of a shipment of 6.5 inch baits.  Not surprisingly, there were just as many big walleyes caught vertically on light jigs and minnows as there were caught with big plastics and ¾ oz. jigs pulled at speed.

As you can guess, Weather was the driver for walleye movements and pattern changes.  Flat calm conditions with highs in the 90s broke midweek with the passing of a major cold front.  The lake is now misty in the mornings with low temps below 50 after the front and high temps just reaching 70.  I don’t expect to find consistent fishing patterns until the weather becomes more stable.  Until then, we will continue to fish it all.

The Takeaway:  Despite changing weather and walleye locations, groups and guides that were committed to actively hunting for big fish were successful.  Many of our seasoned groups knew that they were accepting some risk when they requested to hunt big fish, but that understanding allowed guides the options to take chances and search for developing bites.