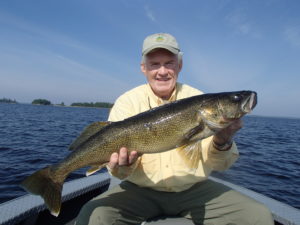 It was a great week at the Wheel for really big Walleyes.  For the week, we caught and released 37 over 27 in., including 5 – 28s, 5 – 29s, 1 – 30, and 1 – 31.  Jim Baker caught his 31 in. walleye of a lifetime on a main lake sand break pulling a 6.5 in. Gulp Nemesis on ¾ oz. Jig.  Doug Smendik caught his 30.5 in. walleye of a lifetime dead sticking a minnow with a light jig on main lake rock.  And from the top down, that is how the week went.  Production was split about 50/50 between the two extremes in our presentation arsenal.  Every guide boat did both every day, but we all adjusted at different rates depending on daily results.

To paint an accurate picture of the week, it is important to note that there was a wide range of production between days and between regions.  There were no walleyes over 27 in. caught today, even though some boats put over 60 walleyes over 18 in. on the sheet.  Guide sheets averaged 35 walleyes over 18 in. per day this week, but some days were 20 and some days were 60.  Some days produced big fish, but only mixed in with a bunch of littles.  Other days we saw great production on sand only to be followed up by multiple boats blanking on the same structure the next day.  The best way to describe it is that you had to be on your toes this week.

It has not been a super wet summer up here and we did see some fires and smoke on the lake this past week.  Most of those went out with the passing of a front and a good general rain on Wed.  There are some trees changing colors to yellow already, although I would say that most of that is due to dry conditions rather than cooler temps.  It is just the slightest hint of the approach of fall so far with a few leaves changing, a few weedbeds looking ratty, and some walleyes moving shallower at the end of the week.

The comment that stood out to me this week was from one of my most senior guides.   His guest caught a monster walleye and we had just made a big racket in the dining room awarding him his Master Angler pin.

At the round table meeting, the guide’s comment was – “ I don’t feel like I earned this one.”

I asked him why.

His answer:  “It did not fit the normal formula…. Find the fish… find the concentration…. Work deeper, pick up some bigger ones, and then verbally lay the ground work to work deeper, and not catch as many fish, but hope for a big one…..

Instead, my guys were happy with volume, we chose to stay shallow, we sorted through the eaters and the slots in 20 – 25 and then BAM!  Monster walleye.

I heard a version of that story from 6 different guides this week.