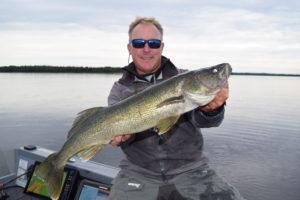 Canadian summer is far, far different than Iowa summer.  Most days this past week, were some version of “I can’t believe how beautiful this day is….”  We again had cool misty mornings on the lake with lows in the 50s and stunningly, sunny, bright blue skies with highs in the mid-70s and very light winds.  You couldn’t ask for better summer weather….   unless you are a fishing guide.

“Hey, wait a minute Mike, didn’t you say you were hoping for stable weather in last week’s fishing report?”  Well yes, I did, but not that type of stable.

The weather did result in a more consistent depth preference for walleyes this past week.  The 22 – 35 ft. depth zone produced about 95% of the walleye action.  Main lake sand and main lake rock were equally productive, but the issue was feeding activity.  At round table, guide after guide reported “marking, not catching.”

With most of the walleye populations in a neutral to negative feeding mood, SWWL guides choose the extreme options.  You can either gear down with 1/8 oz. jigs and minnows and dead stick over concentrations of marked eyes.  Or you can gear up with ¾ oz jigs and big Gulp Nemesis plastics and cover water, at depth, and at speed to search out the small percentage of active fish that are ready to chase down a big reaction bait.  Both of those tactics worked at times, but there was no consistency.  One great fast Gulp trolling pass was often followed up by a blank, because we picked off the only active fish in the group.  Gearing down and dead sticking with 1/8s worked as well, but with finicky fish you need to capitalize on every bite because you are fighting the clock.  And there is the key – results based on time.  Make 2 bad choices in a row and you are behind the 8 ball.  Have a guest angler that doesn’t like to fish Gulp or isn’t very good at it and you better make some changes fast.  There is no way around the fact that this past week was a tricky bite.  If a location, depth, and pattern were hot one day, more than likely that combo was dead the next.  And the only way to win when that happens is to forget it and move on quickly.

For the week, we caught and released 30 walleyes over 27 in., including 6 – 28s, and 3 – 29s.  Walleye guide sheets averaged 30 per boat per day, but there was a much wider range of results compared to previous weeks.

There was a little bit of time focused on chasing pike and that resulted in 9 over 37 in., including 2 over 40 in.

The Take Away:  My guiding attack plan this week was to work the extremes by explaining to guests the reason for the need to work both options, but then carefully evaluating the results.  One Medium power spinning rod rigged with 20 lb. braid, 10 lb. fluoro, and an 1/8 oz. jig.

The other Medium Heavy rod rigged with 50 lb. braid, 15 lb. fluoro and a ¾ oz. jig ready for a 6.5 in. Gulp Nemesis to be trolled at speed.  In our arsenal, you can’t fish lighter/slower and you can’t fish heavier/faster.  That was the action plan that produced results this week.