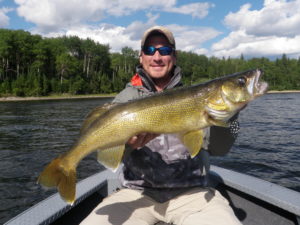 It felt like summer on Lac Seul this past week, but the walleyes did not get the memo.  Daytime highs were consistently in the 70s and 80s with bright sunshine.  We had the occasional shower, but the weather was beautiful.  Lake surface temps are up over 70 and the main lake weeds are almost all topped out.  The surprise is that the heat and sunshine pushed most of the baitfish shallow and the walleyes vacated the deep, summertime locations in mass.

It is true that the odd late June cold snap pushed the walleyes into 20 – 30 ft. prematurely, but I was surprised how quickly they switched back.  More than 90% of the walleyes caught this week came from water 15 ft. or shallower.  There was a good weed bite for several days, but that also became hit and miss when the wind changed directions.  I would take it one step further and say that 75% of the walleyes were caught in water 6 – 12 ft. deep.

Walleyes positioned on the deep edge of the weeds in 9 – 10 ft. of water are easy to catch.  Walleyes located smack dab in the middle of a weed bed that is 8 ft. deep and 40 yds wide are a nightmare to target.  We caught more of them on spoons casting for pike than we did trying to target them with light jigs.  Between the pike bite offs and snagging weeds, it is just a matter of time before you get frustrated and move on.

The pike fishing was good but not great.  I say that because even though there were some really nice pike caught this week, we saw just as many or more that followed baits but would not commit.  For the week, we caught and released 9 over 37 in., including 4 – 38s, 1 – 39, 1 – 40, and Bill Marsden caught a 44.5 in. monster with a 20 in. girth.  He told me before his trip that all he wanted was a really big pike and he got her.

Bass fishing is effectively over for the year.  We caught 3 over 19 in. this past week.

The take away:  One of my senior guides who loves to fish vertical and slow over deep water told the rest of the crew at round table – “MW has talked about this for years… bright sunshine and hot weather pushing All the walleyes shallow –  in the past, I could always find other groups of fish deep and turn them – this week the deep water summer spots were barren…. Empty…. The graph was a white screen of death and it felt like every Lac Seul walleye went shallow.”