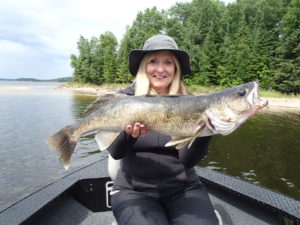 Summer took a break this week.  We experienced a 2-day torrential rain event with over 2 in. of rain, cool temps, and raging East to Northeast winds.  It was a once a season extreme event and it sent the walleyes out of the shallow water and back into the mid depth zones.  There were still a few near the weeds and some walleyes were on sand, but most moved to main lake rock.

The key to success this week was having a fleet of guides on the water using an array of tactics to hunt down groups of walleyes on the move.  We still struggle with suspended walleyes.  We know how to troll cranks, but it just doesn’t fit in with the way our guests like to fish.  The compromise tactic was backtrolling either lighter jigs with live bait at speed or on many occasions, trolling big jigs with Gulp plastics.  Part of the formula is covering water, but I believe that using a variety of jig weights and speeds allows us to target the suspended or slightly suspended walleyes that we might normally miss with traditional vertical jigging presentations.

Reviewing the guide sheets for the week, I was still surprised to see how many walleyes were caught shallow early and how many were caught on a variety of different patterns deeper late in the week.

Overall, Pike fishing was good this week.  The weeds are up, the groups that like to cast were in, and we spent the time chasing them.  The volume of medium sized pike was down a bit, but we did catch and release 17 over 37 in., including 4 – 39s, 2 – 40s, and 3 over 42.  Big spoons were top producers and Grinder spinnerbaits were a close second.

The Take Away:  Plan to win and then…  Plan to experiment, adjust, and win.