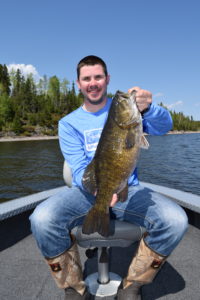 In the past 5 days, we have been through a Winter to Summer transition.  The week began with a cold, wet, 3 day rain event.  We are talking about highs in the low 40s, steady rain and showers, strong winds, long johns, toques, layers, and at the end of the day, hands barely able to tie a jig.  Today was sunny, Hot, highs in the 80s, with not a breath of air on the lake, shorts, T-shirts, sandals, and sunscreen.

It was a shock for us and judging by the stats, it was confusing for the fish as well.  Today, we caught walleyes way back in the skinniest hot water shallow bays, we caught them on standard spring spots, we caught them on transition areas, and we even caught them down deep on traditional summer spots.  The problem was that there was no concentration anywhere.

Walleye volume was actually not that bad for the week.  Daily guides sheets averaged 25 walleyes over 18 in. per boat per day.  The surprise was how few big fish were caught.  For the week, there were only 14 walleyes over 27 in. with none over.  That is a surprising stat that is directly related to the weather.

The pike fishing wasn’t as much of a challenge as long as we focused on transition zones.  There were a few random big fish back in the shallow water, but the vast majority were caught on wind-blown transition areas.  For the week, we had 9 0ver 37 in., including 3 – 40s, 1 – 41, and 1 – 44.  Spoons and diving plugs caught most, but there were also quite a few incidental catches on jigs and minnows.

There were a few pre-spawn Bass caught in the warm shallows, but most were incidental catch while walleye fishing.  For the week, we caught and released 8 over 19 in., including 2 – 20s.

I have been up North long enough to not really be that surprised by weather changes.  You know the joke, “Don’t like the weather?…. Just wait 5 minutes.”  With that in mind, this week was still truly a shocker.