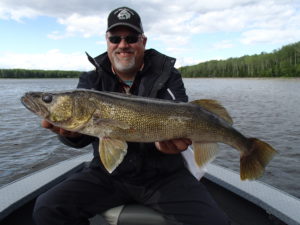 June 10 – 16 is going to go down as one of the hottest big walleye bites that we have seen in some time.  The key was steady wind stacking baitfish on wind-blown sandy shorelines.  Last week’s warm temps resulted in significant weed growth which also helped concentrate fish.  Almost every big walleye boated this week was caught in 8 – 12 ft. of water on sand to loose gravel shorelines, sand bars, or in front of newly emergent weed growth.

Big plastics played a pivotal role in production.  As soon as they knew the bite was on, the guides switched up to more aggressive presentations to target big fish.  At the peak of the bite, the difference was clear.  Big Plastics definitely select for bigger walleyes when the feeding window is open.  The stand out this week was the 6.5 in. Berkley Nemesis.  White and Opening Night were the most productive colors and we fished them on 1/8, ¼, and 3/8 oz. jigs depending on speed.  We still have some of the discontinued Berkley crazy legs Jerk shads and they were also very productive for big fish.  There were times when you could go back over a fading bite and gear down with lighter jigs and minnows to pull a few more fish, but the majority of the really big ones were caught with plastics at speed.

Walleye volume was also excellent this week with guide sheets averaging over 45 walleyes over 18 in. per boat per day.

There was some time spent targeting Pike this week and the results were nothing compared to the walleye bite.  For the week, we caught and released 9 over 37 in., including 3 – 38s, and 1 – 39.  It really isn’t fair to compare, because the guides were focused on big walleyes.

The same can be said for Bass.  There were very few guests willing to leave a smashing walleye bite to go check on the Bass.  A few did.  And they are moving shallow, but still not yet in force.  For the week, we released 3 over 19 in.

The Take Away:  We know when a big walleye bite is on.  The way to maximize production from it is speed and efficiency.  Big Plastics were the absolute key to efficiency this week.  The big ones wanted a meal.  A 2.5 in. minnow didn’t catch their eye, but an almost 7 in. piece of rippling plastic was just about irresistible.