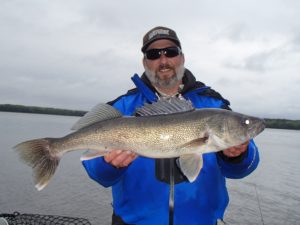 Official ice out for the central basin of Lac Seul was May 8, but the south shore has been ice free since April 30.  There was a stubborn chunk of thick white ice in the north central basins that took quite some time to thaw.

The weather has been a little bit cooler than normal, but we are steadily progressing into the middle of what I would describe as a more normal spring season.  The walleye fishing has been good with our first groups arriving on May 19.

The big pike bite was good, but we never had the classic “day 3 of constant sunshine feeding frenzy.”  It was a more gradual progression of pike into and out of the warmer shallow water bays.  Many of our biggest fish were caught on the first structure outside of the spawning bays.  For the week, we caught and released 22 pike over 37 in., including 5 – 40s, 1 – 41, 1 – 42, and 1 – 43.

We haven’t really begun to target Smallmouth Bass yet, but it seems that there are more and more around every year.  To date, we have released 13 over 19 in., including 2 – 20s.

Lake levels are just about normal as well for this time of year.

Looking back at previous seasons, the headline or take away from the fishing report is often an extreme; fire ban, low water, late spring, super early ice out, etc…  So far, this spring has been as close to “normal” as we have seen in many, many years.