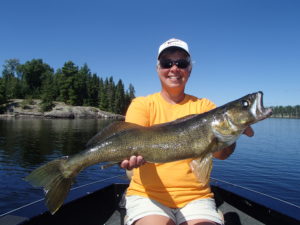 The first signs of the changing seasons are here; cool fronts, the first few yellow leaves, and the fish are starting to move again. We found more big pike on main lake rock near deep water this week and had many reports of multiple T-bones on small walleyes being brought up from deeper water.

There were dramatic swings in the walleye bite this week. We experienced days where the average number of walleyes over 18 in. boated was over 40. And yet on Thursday, the average was under 20. We could mark fish

and we could catch lots of little ones, but you just couldn’t put a pattern together for bigger fish. And then it switched back to a good walleye bite again on Friday. All of these changes occurred with almost no perceptible change in the weather. The ups and downs were felt equally on both main lake rock and sand.

For the week, we caught and released 36 walleyes over 27 in., including 7 – 28s, and 2 – 29s. A significant observation is that almost all of these Big fish were caught in water 30 ft. or deeper. Jigs and minnows were by far the most productive.

en though some are starting look a little slimey or sparse. We caught pike volume in the weeds, but they were mostly smaller fish. Most of the bigger fish this week were caught on diving plugs, spoons, or blades and came off of main lake rock points. For the week, we caught and released 11 over 37 in., including 4 – 38s, 1 – 39, 1 – 40, and 1 – 41.

Missy and the kids are on their way back to Iowa to get ready for school and it is still hard to believe, but I will be packing this week as well. Brett will be taking over lodge management and the fishing report for the remainder of the season.

Already looking forward to Next year,