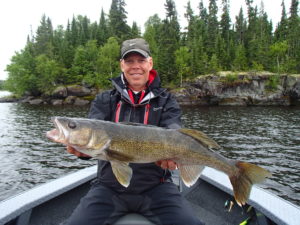 Historically, the week of the fourth of July has been one of less demand than the rest of the summer.  The cabins were all still occupied, but we had a few more guides with some time off and some of our regular unguided groups staying with us this week.  We were still on the water, but we were not out in force.

It was very much a carbon copy of the previous weeks for weather and fishing results.  The weather changed dramatically every day and the fish continued to be scattered and tough to pattern.

As a change of pace, I am going to tell you what happened in my guide boat today to give you a snapshot of what it is like on Lac Seul right now.  The control of the experiment is that I was guiding guys that I have fished with for 15 – 25 years.  I know that they like big fish.  Earlier in the week we had 1 slow “scouting” day, we had 1 good pike day with 3 over 37, and we had one good walleye day with 10 over 25 in., and on day last, their only request was to hunt big fish.

We started the day pulling big plastic with jigs on a main lake sunken island and quickly caught a 25 in. walleye suspended 5 ft. off the bottom in 20 ft.  And then nothing.  We marked a few fish on that pass.  Switched our gear and worked ¼ oz. jigs over a few arcs in 18 – 20 ft.  We caught some eaters and a few slots, but it was slow.  The guys mentioned piking, but we decided that we should fill out our lunch fish before we started.  We moved to another area to fish in 10 – 12 ft. in front of the weeds looking for “eaters” with jigs and live bait with some speed.  We caught a 24 in. walleye and then nothing.  We left there to go to a pike spot that we had fished the previous day.  It was not a known walleye spot, but with a SE wind blowing into a weed bed, I had marked some big arcs the day before and thought it was worth a try.  We instantly caught all of our eaters and put some fish on the sheet.  Time to go piking.  At the first “pike spot,” the first fish in the boat was a 21 in. walleye that hit a spinner bait near the surface in 4 ft. of water.  The morning pike spots were OK for action but we never even saw a medium sized fish until after 11.  In the afternoon, we focused on Grade A pike spots and fished them as fast as we could.  Some were main lake weeds, but others were “retro” back water weed spots and both produced.  At the end of the day, the guys finished with lots of pike action, a dozen medium sized pike, and top end of 37.5, 39, 39, and 40 inch pike.  It was a smashing pike day for our boat and at the same time the walleye results were a mess.  We didn’t spend any more time fishing for them, but we still caught another 24.5 in. walleye out of the middle of the weeds in the afternoon on a 6.5 in. spoon.

That same type of search, test, experiment, and adapt approach happened in every guide boat every day this past week with varying degrees of success.  Once again, the weather made it hard.  It was warm, then flat, then a front, then windy, then rain, then cool, then repeat.  The fish were never in the same place from one day to the next.

Walleye volume suffered this week with fewer boats on the water, but mainly because of the conditions described above.  Guide sheets averaged 30 walleyes over 18 in. per boat per day.  For the week, we caught and released 40 over 27 in., including 9 – 28s, 7 – 29s, and 1 – 30.  As I write this, I am thinking that those are good results, but I was here and I know the level of creativity it took to catch them.  To not call this a tough week on Lac Seul would be untruthful.

There were just a few guide boats pike fishing this week and their results were good.  Main lake weeds and even some transition or “retro” weed areas held numbers and some big pike.  For the week we caught and released 12 over 37, including 3 – 39s, 2 – 40s, and 1 – 41.  Big spoons were number one, but the weeds are topping out and spinnerbaits and top water were just a bit more effective in the heavy weed beds.

The big surprise for me this week was the bass.  We only had one or two days of guests that targeted them for a very short amount of time, but they were on.  In hindsight, it is likely that the peak for some of our best areas happened a week after we were targeting them heavily.  With just 2 guide sheets targeting bass for 1 day each, we had 8 – 19s, and 1 – 20 for the week, all on top water.