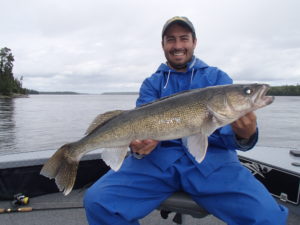 The southern basins of Lac Seul are settling into summer.  There are still a few random groups of walleyes in and out of the weeds, but there are more and more finding their way on to the main lake deeper rock and sand structures where we expect them to be at this time of year.

There were still hit and miss bites and I would say that there are still some walleyes using the 12 – 18 ft. zone, but the most of big walleyes were caught between 20 – 34 ft.  Volume was still a little lighter than what would be considered normal for this time of year.  The daily guide sheets averaged around 30 walleyes over 18 in. per boat per day.

Big walleyes numbers were very strong.  For the week, we caught and released 51 walleyes over 27 in., including 12 – 28s, 6 – 29s, and 1 – 30.  About 10% of the big ones were caught on Gulp with big jigs, but the vast majority were caught using minnows and ¼ oz. jigs.  A big part of the equation was having guides and guests going on the lake hunting big walleyes with intent.  There were some smaller fish down deep, but you had to have faith to stay on those bites to be successful.

The long term forecast is calling for stable and warm temps.  On paper, walleye volume should continue to improve.  I hope we can maintain our pace with the big ones.  I’ll tell you how it turns out next week.