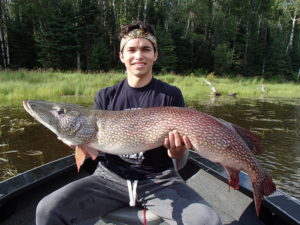 Summer finally arrived to the south shore of Lac Seul.  With the daytime temps soaring into the 80s, the bite in general has begun to improve.   Groups of fish remain scattered throughout the water column and you still have to bounce around, but it is getting easier.

Having said that, the news of the week is BIG FISH!  Jackson Kolb caught and released the new Lodge Record Northern Pike.  It was 47.5 in. long, but it was also a massive, broad, and deep world class trophy of a fish.  Oh, and he also caught a 43.25 in. monster pike as well.  Not bad for a first trip to Canada.

The pattern for the walleye bite is that there still is no pattern.  With the heat, there has been a shallow weed bite in some areas.  Those bites produced volume and nice mediums, but not as many “bigs.”  There were some good bites on main lake rock and main lake sand in 20 – 25 ft., but they were never consistent.   And there were some really nice fish caught on main lake sand and rock down deep in 30 – 35 ft.  There weren’t quite as many fish down there yet, but sometimes they were easier to convince to bite.  Some fish were caught at speed with Gulp and big jigs, but the vast majority were on live bait and quarters.

There were just a few boats that spent time casting for pike this week.  The results were fairly good.  Most days had relatively good volume and there were 9 caught over 37, including 1 – 40, 1 – 41, and Jackson’s 2 big ones.  Spoons and big spinnerbaits were top producers.  Weed beds near deep water were the key.

As a guide crew we have a tendency to take a great fishery for granted. But on a week like this, it is important to underscore the top end potential of Lac Seul.  This lake is still one of the very few that has the potential to produce giants along with outstanding volume and numbers of medium sized fish.  Our guide staff and guests can become a little spoiled and need to be reminded of how fortunate we are to have Lac Seul in our back yard.