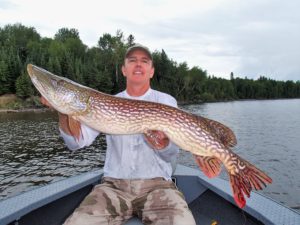 The last five fishing reports have discussed the impacts of cumulative unsettled weather on fish location and fishing production.  For the week of July 8 – 15, you can once again take that effect and then multiply it by 3 times.

We started warm and trending more stable and humid, then went off the rails with massive rains and storms, followed by 2 days of winds pushing over 30 mph, waking up to morning temps in the 40s, and then going to cool, flat, glass calm sunshine.  Once again, we found ourselves chasing walleyes around every corner of Lac Seul.  They were deep, they were shallow, they were suspended in the middle of the basins, and sometimes they didn’t want to bite.  The only thing you could count on is that if you found them on a spot one day, then they would for sure be gone the next.

I think the best way to describe the change from a normal season would be to look at the predictable mega bites that we usually see occur each year.  There are at least 6 major “bites” that usually happen by now that will result in at least half of the guide boats spending the entire day in one specific location.  Every boat would normally be filling sheets.  These bites typically happen in May, June, and July and so far, not one of them has happened.  They are all based on environmental conditions that encourage walleyes to congregate and feed.  The constant barrage of unsettled weather has done everything but encourage walleyes to congregate.  They started scattered and they stayed scattered.

Walleye volume dropped to less than 30 fish over 18 in. per boat each day.  For the week, we caught and released 32 walleyes over 27 in., including 7 – 28s.  Gulp worked only occasionally.  Most were caught with ¼ oz. jigs and minnows in anywhere between 5 and 35 ft. on either rock or sand, in areas that would be considered transition or summer spots.  You get the Point.

The bright spot was the pike fishing.  Some guides were successful at convincing their guests to focus on pike when the walleyes got tough.  The results were pretty good.  For the week, we caught and released 20 over 37 in., including 4 – 38s, 3 – 39s, 1 – 40, and 1 – 41.  Summertime weed locations were the key.  Spoons were tops, but double 8s worked as well.

Bass with intent are done at the Wheel for the year.

Almost 90% of our guests have fished with us for more than five years.  As a manager of guides, that helps.  The guests know that the Lac Seul is the real deal and that the issue is Weather.