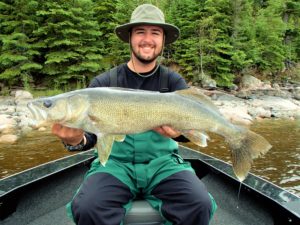 It was another roller coaster of a week on the south shore of Lac Seul.  I know you have heard this story before, but the weather truly was all over the place.  We had a morning low of 45 degrees F.  We had a daily high of 86.  We had high winds.  We had flat calm.  We had inches of rain and Thunderstorms.  We had 3 wind shifts in one day that ended flat calm.  And I could go on.

It was a challenging week to guide, but the results were still pretty good.  Walleye volume averaged 30 fish over 18 in. per boat per day.  For the week, we caught and released 41 over 27, including 14 – 28s, and 2 – 29s.  About 5% of these were caught on Gulp, but the vast majority were caught on jigs with minnows.  The trick was to figure out where to fish them and how fast to move.

There were a few boats that targeted big pike this week.  Despite the weather, the results were good.  All of the big fish targeted were in the weeds and most were caught on spoons.  For the week we caught and released 10 over 37 in., including 4 – 38s, and 3 – 40s.

The bass bite is definitely winding down.  The mayflies are hatching in different areas and this seems to be one of the annual events that marks the beginning of the end of the Bass season.  I think we can still catch a few more, but it won’t be a bite to spend your afternoon on.  For the week we had 10 Bass over 19 in.

All of the guides struggled at times this week.  But at the same time, there was at least 1 or 2 reports at each nightly guide round table meeting that were exceptionally clever, creative, or productive outside of the box.  As a crew, we don’t get better when the bite is easy.  But we improve exponentially when the bite is difficult and we share and build on our solutions.