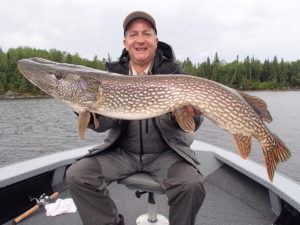 Discovery channel has “shark week” and Silver Water Wheel has “bass week,” and it just happened.  We have had top bass weeks with stronger volume, but this week was about as good as it gets for top end size.  We caught and released 71 smallmouth bass over 19 in., including 7 – 20s.

The series of heavy cold fronts that so affected the walleye bite earlier in the year also had an effect on the bass.  There were days when the strike window was 5 ft. and fish would chase baits down and the very next day after a big cold blow, the window was down to 5 in. and it was then time to go chase walleyes or pike.  There were a few trends that worked for us; dirty water was good ground for bright spinnerbaits, flat calm water with heat and sun was the recipe for good topwater action, and when you were searching or fish were scattered, shallow diving cranks and suspending jerkbaits were a good solution.  If you weren’t changing baits and doing different experiments every hour, then you were not winning.  With lower water levels, we had to fight through more weed growth.  Tubes and plastics worked on occasion, but there were many areas where they just didn’t produce.

Despite the heavy pressure on bass, it was still a very good walleye week.  The same disclaimer applies.  When it was on, it was great.  After the front, when it went flat calm in the afternoon, it was slow.  For the week, we caught and released 53 walleyes over 27 in., including 12 – 28s, and 5 – 29s.  Production was evenly split between main lake deep water spots and spring transition areas in the shallows.  The sun and heat towards the end of the week pushed a few more into the shallower water weeds, but it wasn’t a mass migration.  Some big fish were still caught out deep in 20 – 30ft and some were caught in 8 – 10 ft..   You had to try it all to come up with a pattern each day.  There was no pattern for the week.

With water levels 1.3 ft. lower than normal, the cabbage weed beds have peaked earlier than usual this year.  When they hit the surface, the pike bite is usually on.  We just didn’t have that many guys chasing them this week.  Results were pretty good for those that did with 6 over 37 in., including 1 – 40, 1 – 41, 1, – 42, and 1 – 45.  Weeds were the key.  Baits that got through without getting hung up were the ticket; spoons, spinnerbaits, and occasionally jerk baits.

The patterns change quickly this time of year and the fish can move with surprising speed.  Last week’s report talked about bass fishing picking up and this week’s report feels like it is winding down.  Next week will be the first week of July.  Will the walleyes have moved deep onto summer locations?  Or will they trend shallow towards the weeds?  Maybe they will move “backwards into retro transition zones.”  Only time will tell and that is why the “formula” is the key to our consistent guiding success.