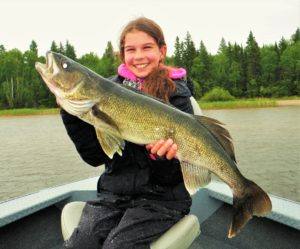 The last few reports have referenced some version of a blender.   This week, we are finally settling in to some more normal patterns and production and it was a good week, but we haven’t had a “rager” walleye bite yet.

As a group the guides are still working through their day by spot checking dramatically different areas.  The deep water bite was never fast, but did continue to produce some big walleyes.  The difference at the end of this week is that we saw the first stages of the shallow water weed bite begin and it included some really big fish as well.  I think the best way to describe the difference between this year and last year, is that in 2015, when it was “on,” almost all the guides would be in 2 or 3 areas and they could stay in one spot for the entire day.  This week’s stats totals were not quite as good for numbers, but the top end was solid.  The difference is that this week, the guides would have 5 – 10 different locations on their sheets where they caught a few good fish.  The key is making good decisions based on catch rates.

There were a few times and places where Gulp and speed produced, but it was largely a live bait bite.  Jigs ¼ and 1/8 oz with minnows were top producers. There still was no predominant depth, but this week we caught just as many 27+ in. fish in 8 – 12 ft. as we did in 14 – 30 ft.  If the weather is warm and stable, that trend will continue into shallower water.

The water is still about 1 foot lower than normal this year.  That difference means that some of the main lake cabbage weeds are a bit closer to the surface than normal.  The result is that the pike have set up shop much more quickly than in previous years.  There were still a few random big fish caught in the back water skinny, but most of the Bigs were caught from transition spots with newly emergent cabbage.  For the week we caught and released 12 over 37, including 2 – 40s, 1 – 41, and 1 – 44.  Spoons and big plugs were top producers.

The bass fishing is just starting to pick up speed.  At the end of the week, guides were adding 10 – 30 bass over 15 in. to their stats sheets.  It definitely was not the peak, but it was fun.  For the week we logged 19 bass over 19 in., including 2 – 20s.  Best presentations were totally dependent on conditions.  Flat calm, sunny days were good for top water.  Dirty water, windy bays were good for ¼ oz. white spinnerbaits.  Areas with low concentrations lent themselves to covering water with super shallow diving cranks and rattle traps.  Even though I know not to make predictions, next week should be good for bass (unless there is some crazy weather.)