The first report of 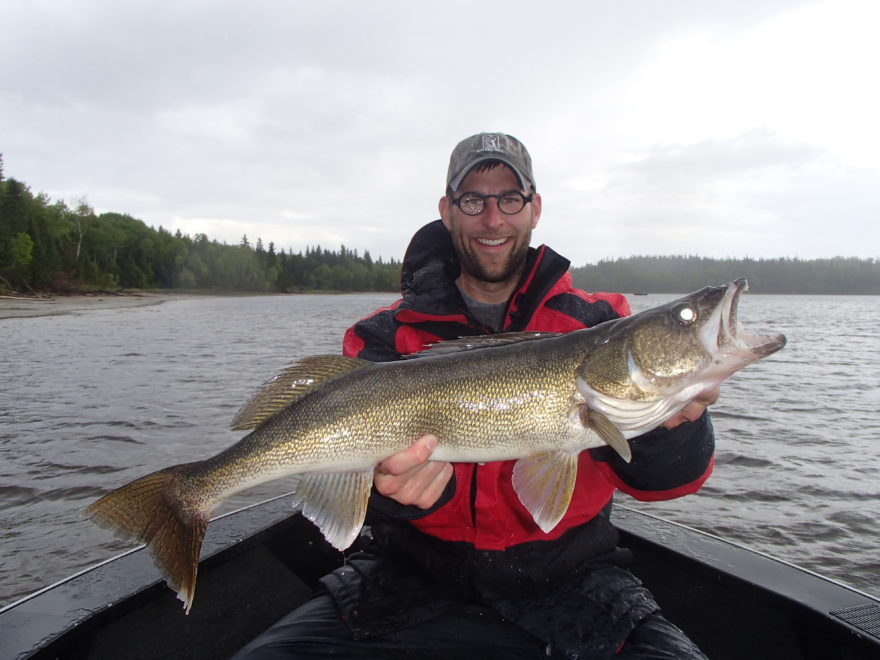 the year talked about the blender, the second report of the year talked about the “puree,” and in hindsight I should have come up with another mixer speed in the middle and saved “puree” for this week. Three massive cold fronts in three consecutive weeks sent the fish to the four corners of our world. It was a shock to wake up to 39 degrees F for more than one morning in a row. Even more of a shock was to find how scattered the walleyes were after the front.

I brag about my guide staff to a fault and this week they more than earned their praise. The guides found walleyes literally everywhere. They used our formula for searching and experimenting to figure out which groups of fish would respond to speed changes and depth changes to find the best catch rate for that day’s conditions. It wasn’t easy. And it wasn’t easy to keep track of during round table, but I will give you just an idea of some of the extremes.

Ryan – found multiple big walleyes in 30 ft. of water on main lake summer structure but had to slow down with 1/8 th oz. jigs and dead stick to catch them.

Ryan – (the next day) found walleyes way back in 2 ft. of water on the edge of a creek channel in a stump filled bay. Caught them by pitching light jigs and plastics up into shallow water.

Trent – put 30 fish on the sheet in one afternoon dragging jigs and minnows on a secondary ledge in 20 ft. of water next to a normal transition spot.

J.R. – pulled ¼ oz jigs and Gulp at speed in 10 ft. of water for an active bite in what would have been considered a normal spring spot.

I could go on, but you get the point. What I didn’t mention was the 150 experiments that didn’t work. My take away for this week is that, if presented with these conditions 15 years ago, my crew would have had a tough time. Years of accumulated shared information and experienced guides who trust the program are the only reason that we had good results this week. And to be honest, it was fun to shock some groups. “I never imagined that we would catch this many big walleyes out of 25 ft. in the first week of June!”

Volume averaged 30 walleyes over 18 in. per boat per guided day. For the week, we caught and released 43 walleyes over 27 in., including 7- 28s, and 3 – 29s. There was no average depth or consistent presentation.

Surprisingly, the big pike action improved at the end of the week even though there was just a little bit of sunshine and surface temp increase. Many big pike moved back into the shallow water bays. The “retro” bite was not uniform across the lake and only worked in a few specific areas. For the week, we had 21 over 37 in., including 4 – 39s, 2 – 40s, 2 – 41s, and 1 – 42. Spoons were most productive.

Bass fishing just started to pick up at the very end of the week, but it is not even close to being on. There was only one 19 caught for the entire week.

I learned long ago not to make predictions about the next week and write them into a fishing report. Historically I was wrong ½ the time, but that is why I love being part of this guide crew. Even if I don’t figure it out, someone else will and we will all have a better chance to win the next day.