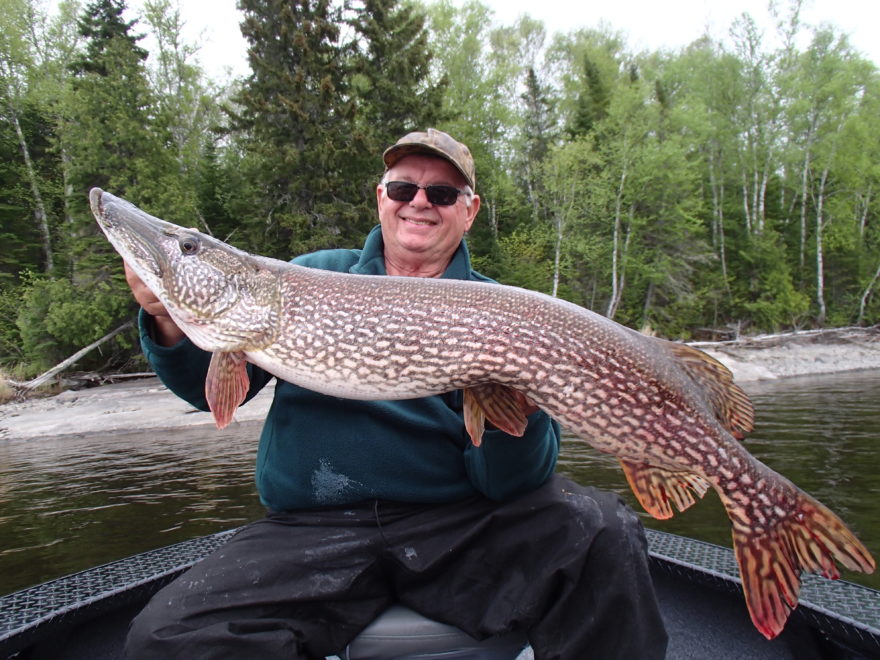 Official ice out for the central basin of Lac Seul was May 5, but we have been at the lodge since April 12.  It was a

challenging spring, but we finished the new Bonfire Bay Cabin, installed a new 50 Kw John Deere power plant in a new diesel shed.  We built and finished a new pump house for distribution of water and power.  And we did many more things that you don’t care about, but they make it easier for us to do a better job of taking care of our guests.

Fishing season officially began on May 21 and we have been full since.  May 5 was another “normal” ice out, but we had two weather extremes since then.  We started the season dry and hot which led to a fire ban that is still currently in effect.  We also had a massive cold front the weekend of the 14th that scattered fish all across the lake.

This is the second year in a row that the pike spawn has been interrupted by a huge cold front.  It feels like most spawned before opener and the rest finished quickly after.  The pike are in full transition now and have become less predictable than normal.  It was still a good pike opener with 18 over 37 in., including 2 – 40s, 1 – 41, and 1 – 42.  During preseason guide training the crew caught 9 between 40 and 42, so it could have been better timing.

The extreme weather also affected walleye patterns and locations.  Many main lake areas have had surface temps above 60 and are already holding some walleyes.  At the same time, we are also catching walleyes on spoons way back in 1 – 2 ft. of slop water while we are fishing for pike.  And The first wave of big ones have already moved in to our local springtime locations.

We are fishing all of them.

Volume is always a little lower than average for walleyes during opener, partly because of the amount of time spent pike fishing.  The guide sheets averaged between 25 – 30 walleyes over 18 in. per day.  For the week, we caught and released 43 walleyes over 27 including 13 – 28s, and 2 – 29s.  Most were caught with light jigs and minnows in 2 – 12 ft. of water.

The warmer water resulted in a few more bonus bass catches while pike and walleye fishing.  There were a few scattered big ones in the mix with reports of 5 – 19s and 2 – 20s.  It will still be awhile before we really begin to target them.

As usual, the lake levels talked about on some of the fishing forums are exaggerated.  The median lake level for Lac Seul this time of year is 1166.4 ft. and today it is 1165.78.  It is a little low for this time of year, but in no way does it affect how and where we fish.