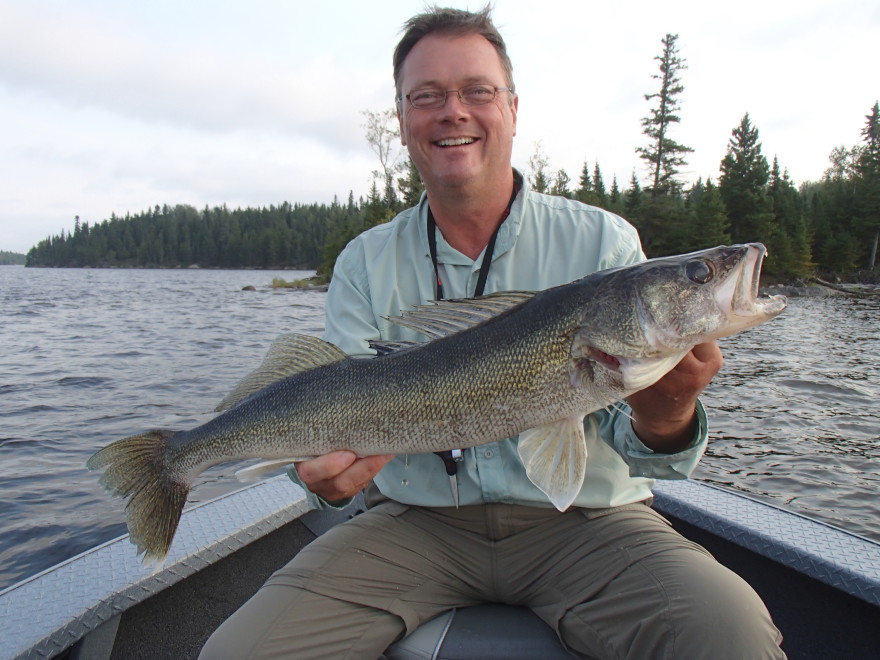 The week’s weather was steady, hot and sunny with southerly winds, and the walleye were steady as well. As often happens this time of year there were strong numbers of fish to be found in lots of places and sorting out the locations that held the best chance of big fish was the challenge of the week for our guides.

As a group the guides found that through the week fish of size trended to rock structure. There were lots of fish on the summer sand breaks but catching 22-27+” walleye there took quite a bit of sorting through smaller fish, and some days you could easily use up too much fishing time on a sand break before getting to enough of the right size fish. As the week progressed our guides shifted their focus to rock structures to be able to concentrate effectively on those “medium” sized and bigger walleye. Rock structures being the way they are, they lend themselves well to fishing “spot on spot” and moving slow with light jigs. The trick this week was combining those slow and subtle tactics with covering water. The best day of the week for my boat came from fishing a big, spread out rock pile in the middle of a deep basin. We jumped around still-fishing “spot on spot” on individual rocks on top of the structure, collecting fish quickly at each stop. The combination of spot fishing with getting to more water produced good numbers of 22-25+” walleye and a couple of big ones that day. For the week our boats caught and released 21 walleye over 27 inches, including 2 over 28, and 2 over 29 inches.

The first few days of heat and sun this week looked good for the pursuit of big pike. We had just two boats devote part of their time in the afternoons to casting, with some success. We caught and released 6 northerns over 37 inches with our best being a 41 incher. Surface water temps continued to climb as the hot weather continued, that made our guide staff a little less optimistic about the big pike and our guests elected to focus mostly on walleye in the latter half of the week.

A guide’s takeaway this week: the fish were there to be caught – the key was finding an approach that got us to the fish we wanted.

September is a month of changes for us here at Silver Water Wheel Lodge. There are plenty of changes on the lake that our guides look forward to – the weather can let you know fall is near, the walleye often move deep in numbers, and the big pike start to concentrate in shrinking weed beds. There are plenty of changes at Silver Water Wheel Lodge too. Many of our young staff members head off to continue their education or other winter activities. We are currently fishing with just 9 guides on the water – down from a season high of 15. That means 45 guided days recorded this week instead of the 75 in the summer months. I like to mention the number of guided days each week this time of year for our regular readers of the fishing report, who might compare numbers of fish caught in this report with reports from earlier in the summer. When you do the math the 21 walleye over 27” for 45 guided days in this report is right on pace with lots of our summer weeks for the past few years.