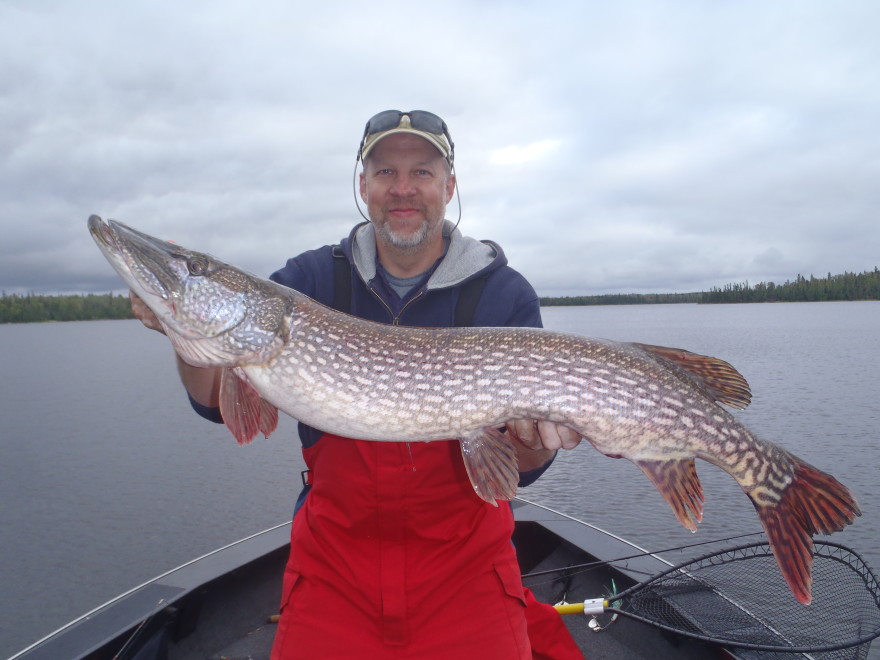 Our story this week was trophy pike hunting. Most days we had only a few boats on the water, adding up to just 31 guided days for the week. The majority of those 31 guided days were spent in pursuit of big pike.

I remember mentioning last week that we were looking forward to this week’s forecast for good pike fishing weather. Unfortunately, we never did get the cool, sunny days that we consider ideal for big pike this time of year. Quick weather changes and strong winds from all directions this week meant those dying off weed beds that are our mainstay for producing giants in the fall uprooted quickly. The weeds disappeared in a rush, leaving no time for the northerns to concentrate in those shrinking weed patches. With our primary patterns and locations not producing like we hoped our guides had to invest more fishing time in searches and experiments this week. Some days the experiments produced better results than others, but we did find a couple of answers. One option was to stay in motion, jumping from weed patch to weed patch and then another, and another, and another patch. Moving quickly through the spots that showed nothing and putting in casting time on the patches where we saw fish or caught mediums to find the one that held a good fish that day. A second option was to focus on rock structures. We often find big pike on rock points leading into shallow water bays in the fall, and if we could identify locations holding pike that day we were able to collect some good sized fish. Overall, for the week we caught and released 14 northern over 37 inches including three over 41.

While most of our guests chose to chase big pike we still had a few boats dedicated to walleye fishing this week. With only a boat or two’s information to rely on when building a pattern each day, our guides found their best success sticking with the trends from last week, targeting rock structures for big walleye and checking shallow water as well as the deep stuff. This week we counted just 31 guided days and caught and released 14 walleyes over 27 inches including one 29.

My takeaway: This week was a good reminder for me of the dangers of making predictions here on Lac Suel!