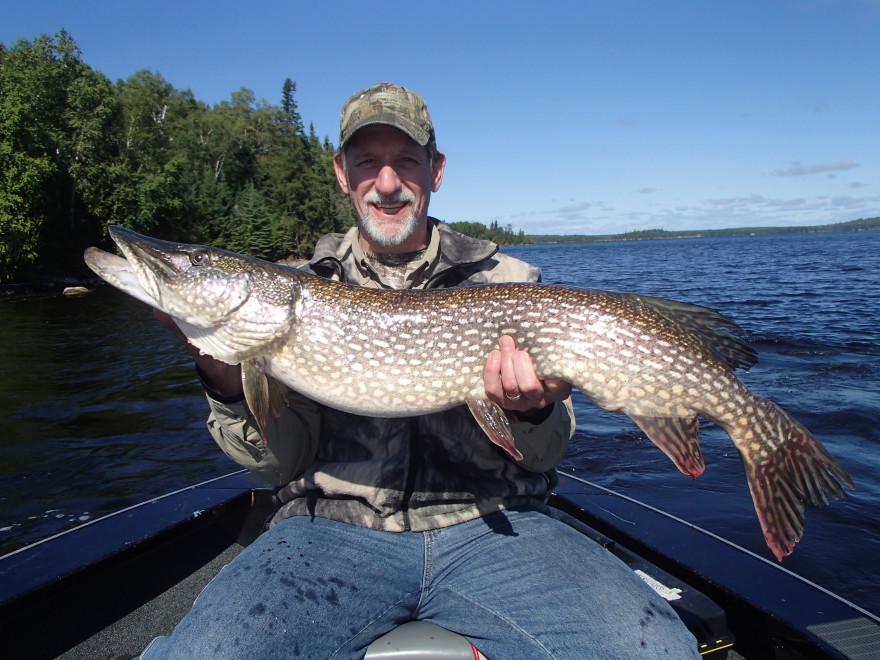 It felt like summer here on Lac Seul at the beginning of the week and fall by the end. We started the week with warm and sunny days, but we saw less and less sun and temperatures steadily dropped as the week went on. As the weather changed over the course of the week, the guide staff’s focus and choice of tactics changed with it.

The walleye kept with the trend they were following last week and stuck to the rock structures through most of this week. Sand continued to produce good numbers of fish up to the 21 inch range but the guide staff dedicated their time to rock when searching for the big ones. As our guests and guides shifted their focus toward northern fishing in the second half of the week, a lot less time was spent searching out the next move of the walleyes. But one trend our boats that were fishing walleye identified toward the end of the week produced good sized walleyes in shallower water as the weather cooled off. A good number of our big fish this week came from just 12-18 feet of water. For the week we had 41 guided days on the water and caught and released 21 walleye over 27 inches including four fish over 28 inches.

This week saw many of our guests really begin to focus on big pike. Through the week the weather cooled off and lake surface temps dropped. Add a little cool sunshine, and the guides here start looking for the big pike to show up. In the second half of the week a lot of boats chose to devote at least half their time to casting, and some of our boats spent their entire day searching for big northern. The number of spots reliably producing big pike went from just a couple to half a dozen over the course of two days of cool sunshine. We’re looking forward to a good weather forecast for pike fishing next week, and it feels like we’re still just getting started with trophy northern this fall. For the week we caught and released 12 northerns over 37 inches including three over 41 inches, almost all of them in the last few days.