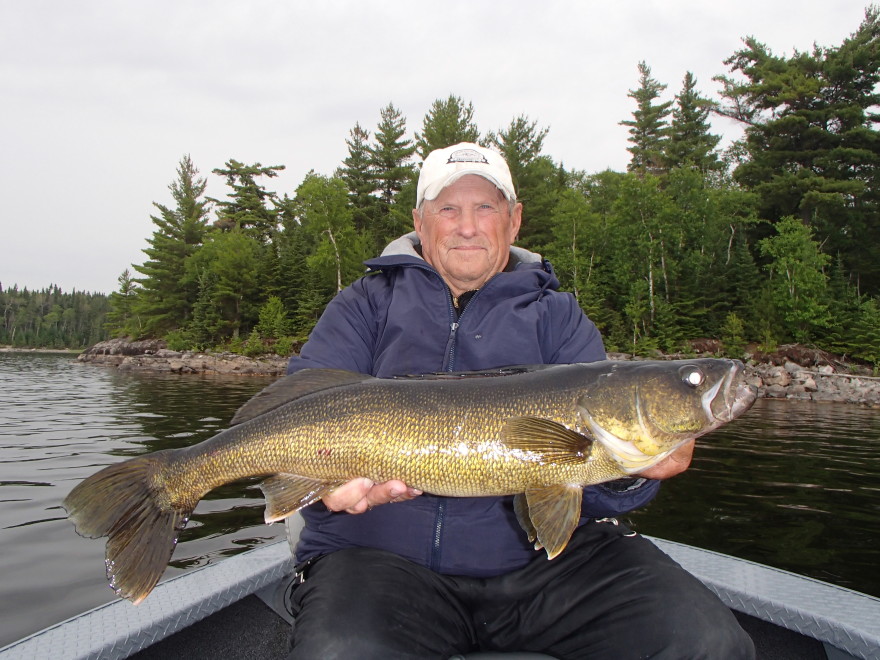 It was a hazy, smoky week on the south shore of Lac Seul. The weather was warm, humid and bounced between prolonged periods of flat calm and the occasional thunder shower. It felt like summer, but when we tested the usual mid-summer deep sand or deep rock for walleyes, we came up with little to zero results.

We have run into this combination of weather before and it usually coincides with our bait trappers also having trouble catching minnows. The most significant observation about this week was the fact that almost 90% of the baitfish on the graph were marked in the top 10 ft. of the water column. We found and caught suspended walleyes in many areas, but most were slightly deeper than the nearest weed bed in a dead end bay on the sand flats. Typically, we found smaller walleyes closer to the weed bed and larger walleyes in 12 – 20 ft. suspended 2 – 10 ft. off the bottom.

Most of the guides tweeked some combination of depth and speed with another combination of live bait or gulp to find that day’s formula for success. There was no consensus for a pattern, but the answer was often shallow – kind of. Main lake points sticking out into the basin were OK, but if you could guess where a walleye would go after it fed on mayfly larvae in a shallow weed bed, then you had the answer for that day’s puzzle.

The big pike bite was strong again this week. Many of the cabbage weed beds are topping out and the gators have moved in. Big spoons, in line double 8 spinners, and big spinnerbaits were the most productive baits this week. There was also good action to go along with the high quality trophy production. Only about 25% of our groups spent time casting, but most that did experienced some level of success. The flat calm afternoons that result in a slower walleye bite do not seem to have the same impact on the Pike. For the week, we caught and released 21 pike over 37 in., including 5 – 39s, 2 – 40s, and 2 over 41.

You could catch a bass if you wanted to say that you did, but for me, the bass bite is done for the year. There already isn’t enough time in a day to fish all the pike and walleye spots I want to try.

The Take Away: Summer is here – Adjusted tactics to target suspended walleyes, bass are done, and big pike in new weed growth.