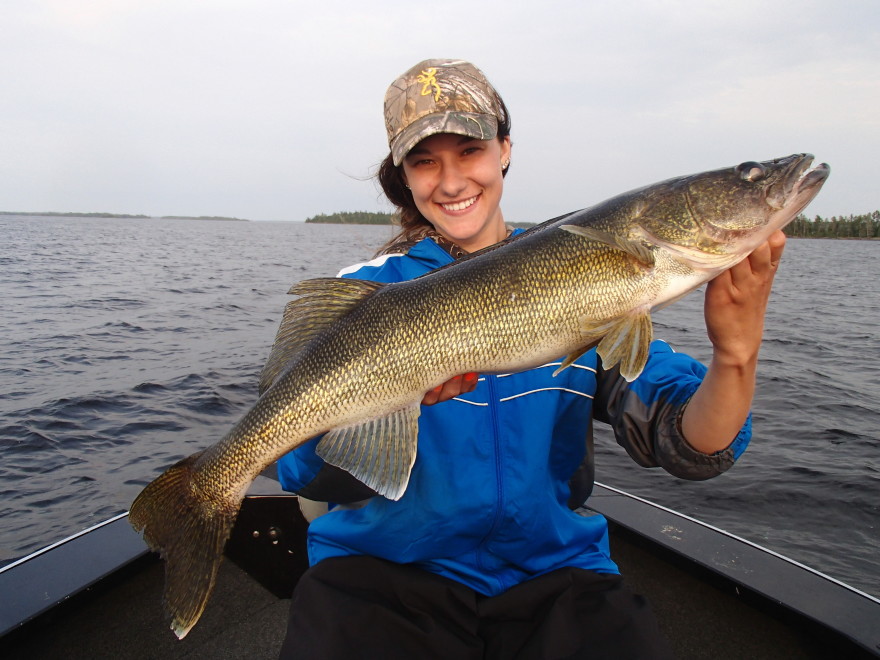 We experienced the same big weather front that went through the upper Midwest this past week. Heavy rains, thunder storms, and high winds were followed up with very cool temps. The week continued with volatile weather, more storms, and ended with a blast furnace of hot SW winds. As you would expect, the change in weather had a major effect on fish locations and activity level. We began the week with most all of the walleyes pretty much doing the same thing then ended the week with walleyes all over the place.

My Dad retired from the Air Force and he would always say, “Flexibility is the Key to Air Power.” It is also the “key” to on the water power. Guides were on their toes this week and made daily plans designed to gather as much information as quickly as possible. When you know you have groups of walleyes on main lake deep water rock, in 8 – 10 ft. of water in front of the weeds, suspended, and also moving on to main lake sand, then you have to plan a strategy to eliminate water and narrow your focus. The tough part is that the formula changed every day.

Despite the challenges, SWWL guides were able to not only find good volume, but also consistently produce big walleyes. For the week, we caught and released 45 walleyes over 27 in., including 6 – 28s, and 7 – 29s. Walleye volume dropped from last week to 50 walleyes over 18 in. per boat per day. I again had to have some expectation management discussions with groups. The guides get used to charting 10 walleyes over 18 in. per hour and when they can’t find that bite, they call it slow. In reality, it was still very high volume walleye fishing. Live bait and lighter jigs produced far more than Gulp and big jigs at speed.

Pike fishing ebbed a bit with the change in weather. We still caught volume, but the top end size slid down a notch despite some serious effort to chase the big ones. For the week, we caught and released 10 pike over 37 in., including 5 – 38s, 2 – 40s, and 1 – 41. Big spoons in the weeds were the top producers. I don’t push name brands often, but the William’s Whitefish spoon was a super top producer.

The Take Away: Spoiled – even when we actively try not to be. Human nature is that way. I checked a group out this week and they talked about some of the afternoon fishing being slow. They had guide sheets with 70, 50, and 80 walleyes over 18 in. per day along with several huge fish. They suffered a detailed lecture …