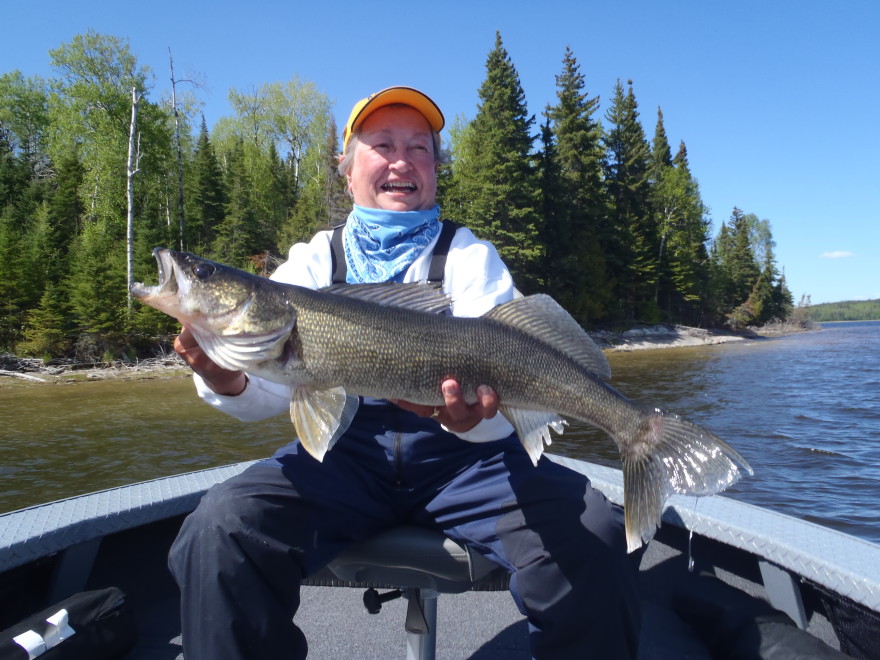 It has been so long since we have seen a normal year that we almost forgot what one looked like. The recent years have been riddled with extremes; late ice, lots of rain, high water, early ice, etc… This first week of June had some cool mornings, some sunny days, and great walleye fishing. The lake level is just above normal for this time of year and finally the calendar matches what you would expect to see the fish doing. Waves of walleyes moved into the transition areas of the south central basin. The pike are in transition from spawning to summer locations, and the bass are getting ready. Surface temps are between the low 50s to the low 60s and we are starting to see tree pollen on the lake.

Walleye volume and size were both excellent this week. Guide sheets averaged 40 walleyes over 18 in. per boat per day. The highest daily total was 72. For the week, we caught and released 66 walleyes over 27 in., including 12 – 28s, and 4 – 29s. Jigs (1/8 oz.) and minnows were by far the most productive presentation. There were a few walleyes caught shallow on the pitch bite, but most (and all of the big ones) were caught dragging long lines in 7 – 14 ft. of water. We did find fish on the main lake but transition areas between the back bays and the main lake were the most consistently productive.

There was some time spent chasing pike this week, but they were scattered and it was tough. For the week, we caught and released 5 over 37 in., including 2 – 39’s and 1 – 41. The randomness is hard to get around. Some were way back shallow, some were on the main lake, and I think you had just as good a chance of catching a big pike while walleye fishing this week.

We did have a few guides spot check the bass areas. It is a “normal year,” so there were a few bass in that 4 – 8 ft. staging zone in the warm water bays. The shallow, shallow was vacant, but not for long. For the week, we caught and released 9 bass over 19 in.

Long time guests Jerry and Jane Callahan were up this week. Jerry and I have known for many years that the ladies always catch the big ones, but this week Jane dominated the photo board with a 19 in. bass, 3 – 27 in. walleyes, and a Master Angler 29 in. walleye. I presented quite a few Master Angler pins this week, but Jane’s is the one that I will remember.