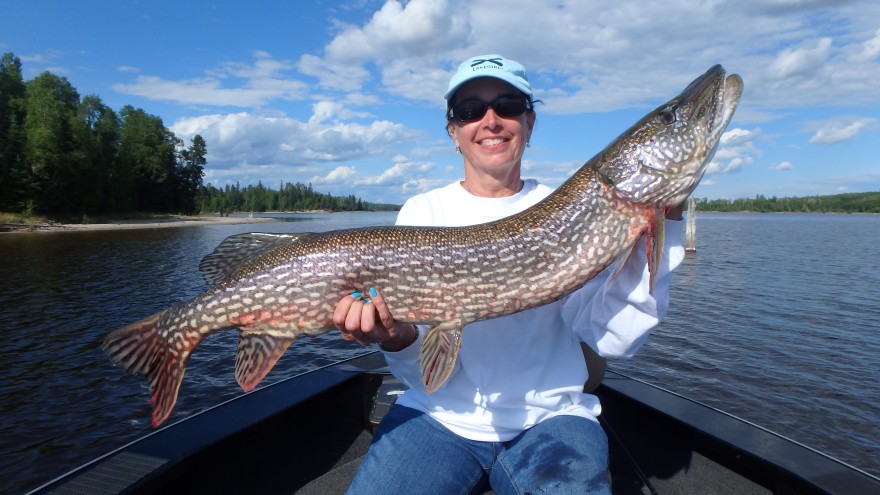 The weather felt more like July than June this week with high temps close to or above 80 with thundershowers. The smallmouth bass bite peaked just in time for our Hartley/Bailey Texas group to enjoy the show. The cabbage weeds shot up with the warm sunshine and light winds. The big pike moved into the weeds just a little ahead of the normal calendar. The walleye fishing was still very good overall, but it was often the second choice species for many of our groups.

The smallmouth moved shallow so both top water and tubes were very effective. There were windows that were more productive than others, but overall it was a good bass bite. For the week, we caught and released 153 bass over 18 in., including 31 – 19s, and 4 – 20s.

There were some great walleye catches for boats on days when ½ the other guests were bass fishing and another ¼ were pike fishing in the afternoon. There were also a few flat, calm, sunny afternoons that made for tough walleye production. Considering the amount of time that was spent chasing bass and pike, overall numbers for walleyes were still good. For the week, we caught and released 43 over 27 in., including 11 – 28s, and 4 -29s. Walleye volume was a bit more variable, but averaged 45 fish over 18 in. per boat per day.

The walleye bite was less predictable this week. There were some good “Gulp at speed days,” but there were also several “slow the pace down and drag jigs and minnow days.” We ended the week with a hot, flat spell that sent most of the walleyes super shallow.

The pleasant surprise this week was a good big pike bite. Historically, we have seen a spike when the cabbage weeds hit the surface the first week of July. Whether guides were anticipating that bite or the big ones moved in early is up for debate, but the results were solid. For the week, we caught and released 16 over 37 in., including 2 – 39s, 3 – 40s, 2 – 41s, 1 – 42, and Debbie Rosenow caught a 44 in. pike of a lifetime. Most were targeted and the growing weed beds near deep water were the key.

Great guides seek out the unexpected windows for opportunities to land big fish. The best ones don’t care what species, they just offer options to their guests and let the current conditions dictate the order in which they conduct their experiments. Many guides were off the beaten path this week and it made for a great week.

The Take Away: A big bass peak, the cabbage is almost to the surface with the big pike in it, and the walleyes were less predictable, but still a good choice.