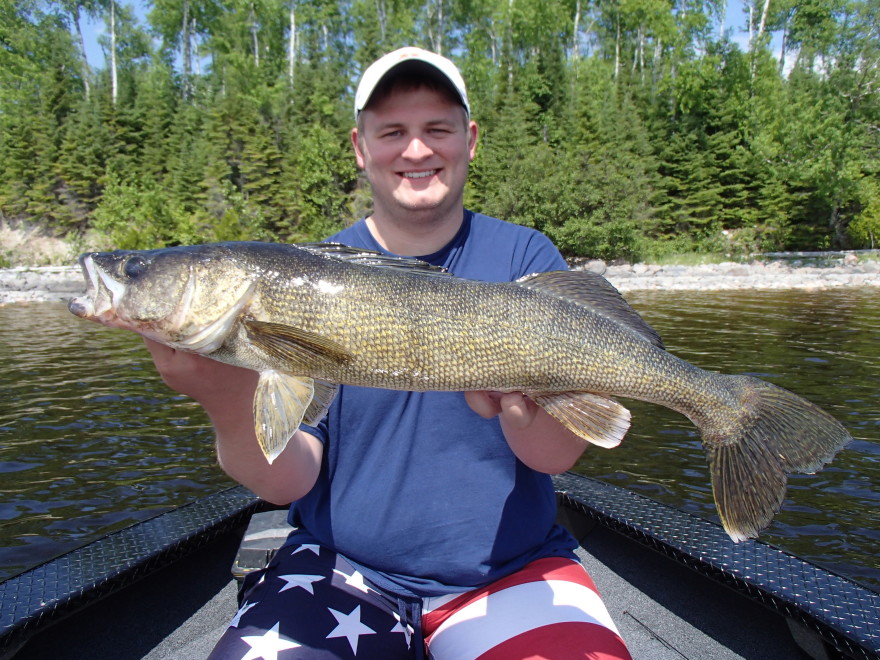 Walleye fishing was off the charts this week. Last week I said the walleyes hit the South shore of Lac Seul in Waves. This week, it was a Tsunami. As always, there were slower days than others when the wind didn’t blow, but the fast days were as good as I have ever seen them. I really don’t feel like we did anything new or different, we just maximized our production on fish that moved into areas in force.

Weather-wise, it was warm and stable with the expected rain for this time of year. Normal is the only word that comes to mind, but the walleye fishing was as good as it gets. We have had weeks with higher numbers of big fish, but the volume of walleyes this week was the shocker.

As usual, jigs and minnows were the key in depths of 5 – 12. We did break out the Gulp and on the hot bite days, did very well. When the wind didn’t blow, it was live bait only.

The Pike bite was still expectedly random. Transition is always tough. There were a few big fish caught casting, but there were just as many caught on jigs while walleye fishing. For the week, we had 10 over 37 in., including 2 – 38s, 2 – 39s, and 1 – 40.

The bass have started to move into the shallows. Early stage areas already have big fish set up in 1 – 4 ft. and guides broke up flat water afternoons by targeting bass. It will still be a week or two before all of the bass move shallow. For the week, we caught 51 over 18 in., including 18 – 19s.

Dan Sigurdson has been bringing his sons Nick and Alex to the lodge since they were in middle school. They like to spend their evenings at the lodge in their boat at the dock getting organized for the next day. I joined them on their arrival day. Alex had already caught a 28 and they asked about the big fish numbers for the year. I always keep track, and I told them that this year was good for 29’s, but we hadn’t had a 30 yet. We all agreed it was just a matter of time. Two days later, Alex put the first 30 of the year in the boat.

Take Away: Epic Walleye Bite, Pike still on the move with weed beds 1 – 4 ft. high, and bass moving into the shallows in the next week or two.