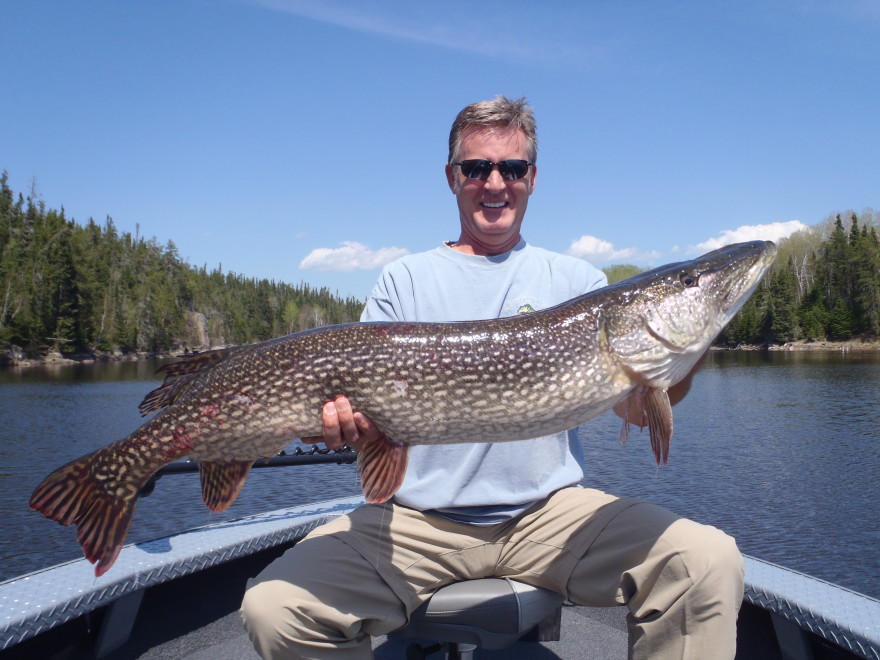 Spring finally arrived and the cabins filled up on May 22. We have seen so many days of sunshine and 70 that it is hard to believe how bad the weather was last week. Both the walleyes and the big pike moved back into the shallows and we had a great fishing week.

The big pike were back in the shallow bays, but not necessarily always in the shallow back. Many were suspended on the front side of the bays. If you found baitfish jumping away from your cast or super warm surface temps, you were in the right spot. The most productive baits were spoons and big floating plugs (6 in. Jakes and Shallow raiders). It all happened very fast. I know that many fish spawned before the big storm and the rest finished quickly after. At the end of this week, my gut feeling is that we are well into transition and the pike are moving on.

The Walleyes are on the move as well. The south central basins near the lodge are walleye central, but many of our summer residents spawn elsewhere. They are finally done and migrating to summer zones. For the week we caught and released 36 walleyes over 27 in., including 3 – 28s and 4 – 29s.

Walleye volume averaged 20 fish over 18 in. at the beginning of the week and ended with sheets averaging 50 over 18 in. It was a night and day shift. The water warmed up, the fish arrived, and we caught them. Jigs and live bait produced the most, though it was surprising to see how many fish were caught from shallow water with husky jerks and spoons.

The bass are showing up on the walleye bite, but the big push shallow is still a few weeks away. We saw five over 19 in. this week, but that will skyrocket soon.

The water level has risen 2 ft. in 3 weeks since ice out. It is still above average for this time of year, but will continue to rise with the recent rains.

It never ceases to amaze me how fast the different phases of season come and go. Spring is a blink and this year it happened this week. And then we move on like we always do. We are already finding the first groups of walleyes showing up on main lake transition spots.

The take away: The Spring pike peak is fickle and tough to predict, but when you time it perfectly, it can be the best big pike fishing of the year.