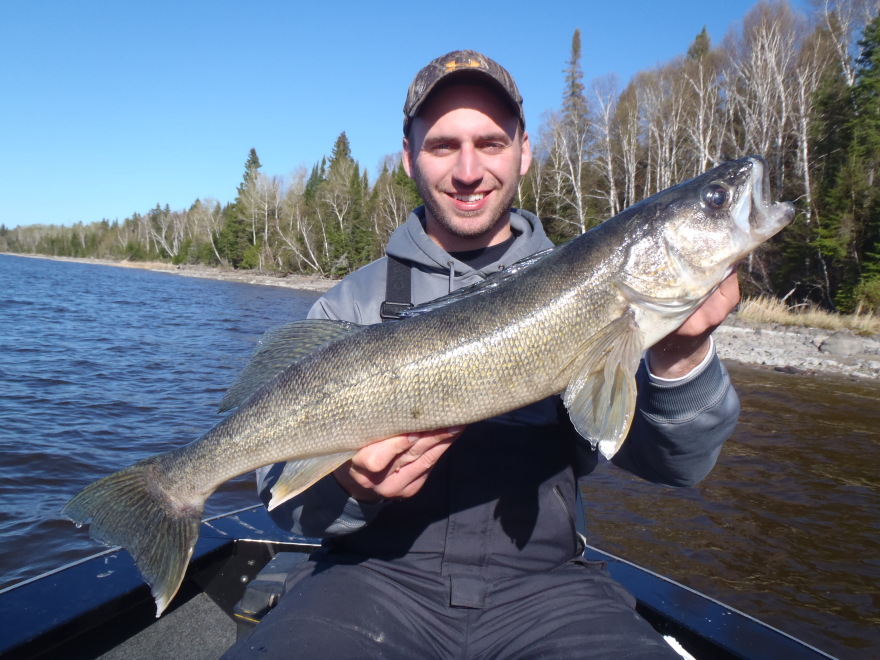 The official ice out date for the South Central basins of Lac Seul was May 8 for 2015. We would consider that uncharacteristically normal, but the weather after was not. Prolonged cool conditions followed by a Monster spring storm shook up the lake and sent the fish everywhere but the expected shallow spring locations. I have seen many spring snow storms over the years, but this one was exceptional in intensity. It rained several inches, the winds were sustained at 30 mph gusting to 40 for 2.5 days, air temps dropped into the 20s for daytime highs, and then the freezing rain turned into 2 inches of snow. It was a huge weather event. After the previous late ice outs in 2013 and 2014, I decided to plan camp opener for May 22. With a full book, I did have some adventurous groups willing to gamble on the early season weather. They made the most of it, but the fishing was not great. We had a total of 16 anglers in camp this past week. Walleye volume was less than expected. For the week, we caught and released 14 walleyes over 24 in., including 3 – 28s, and 2 – 29s. Guides targeted fish near main lake spawning reefs or back in some of the isolated warm water bays. Jigs (1/8 oz.) and minnows were the most common presentation with just a few caught on cranks. The disappointment was the big pike bite. Usually it only takes a day or so for the big ones to reverse direction and head back into the shallows. It has been warm since the last storm, but 4 days after and there are still very few fish in the back of the bays. There has been some debate amongst the guides as to whether it is done, delayed, or possibly split the groups of fish between those still in pre spawn and those that accelerated into transition. Time will tell. For the week, there were 20 pike caught over 37 in., including 3 – 40s, 1 – 41, and 2 – 42s. Spoons, big cranks, and Husky Jerks were top producers this past week. There were a few bass caught, but all were incidental while fishing for pike and walleye. Despite what is being written on a few of the fishing forums, Lac Seul lake level is currently above normal for this time of year and rising rapidly. The other surprise was how quickly we found walleyes out on main lake transition spots. Some of the old stand by spring spots produced far fewer eyes than areas that normally don’t start holding fish until June. The Take Away; It was a big storm and the fish definitely felt it.