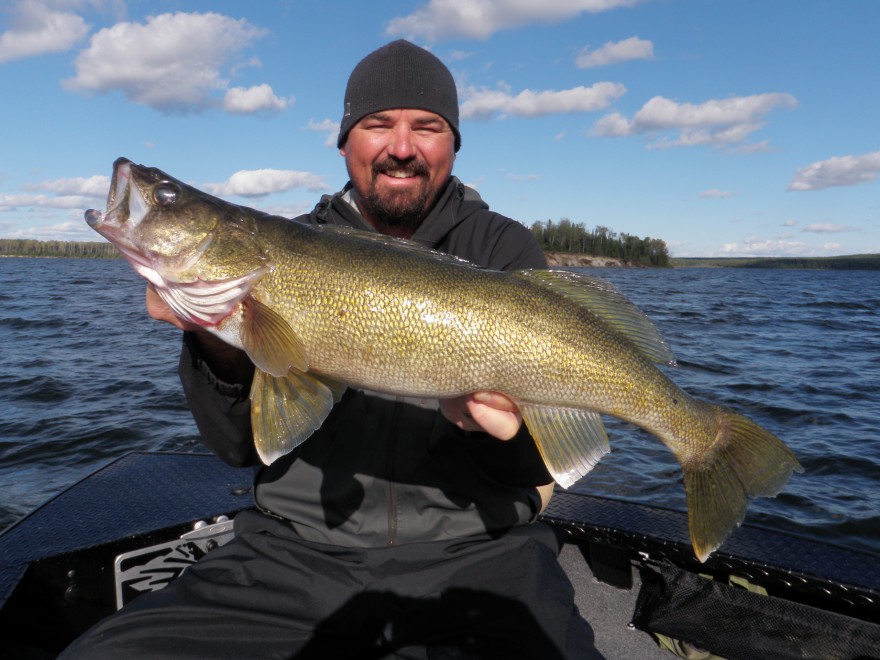 Sand, sand, and more sand! The guide reports at our round table meeting were steady all week, the walleyes were on sand, and they were there in droves. Main-lake sand structures were our best producing spots this week and, as often happens in September, the fish trended towards a more active bite. We didn’t get to a full on ‘’gulp’’ presentation, but some of our boats found good bites using live bait on heavier jigs and moving faster – a big change from the trends of the last few weeks.

Walleye numbers were strong this week. The guide sheet average was 43 walleyes over 18 inches caught and released each day and the highest total was 75 in a day. Along with that, we caught and released 32 walleyes over 27 inches, with 7 over 28, including a 29.5 and 30.25 incher. I know to regular readers of these weekly reports those numbers may not sound exceptional – to put them in perspective, there were only 34 anglers through camp this entire week. I have to say that while I was out there, and listening to the guide reports each day, it felt like a great week to be fishing on Lac Suel. There were just 47 guide sheets turned in this week, and 11 of them had ‘’filled the back’’ (that’s 60+ walleyes over 18’’) – a SWWL guide’s standard for an exceptional day. One of our most senior guides, Mike Owen, saw a best for his 9 years on Lac Suel. His boat caught and released 6 walleye over 27 inches including 3 at 28 inches, all in one morning’s fishing! Days like that don’t come very often, you just have to enjoy them when they do!

Almost no time was devoted to casting for pike here at SWWL this week, but the boats that decided to pursue big pike found them. For the week we caught and released 6 fish over 37 inches, including a 40 and a 41 incher.

The end of our 2014 season is drawing closer. This week two more of our guides fished their last day of the 2014 season. Both received a parting gift from Lac Suel – their best day of the season. Ryan boated the biggest walleye of his season at 30.25 inches, and Stefano put his net under 4 walleyes over 27 inches on his final day. Both great days of fishing any time, and fantastic ones to finish your season on! I hope I get to finish the year as well as they did.

Until next week, and the next bite.