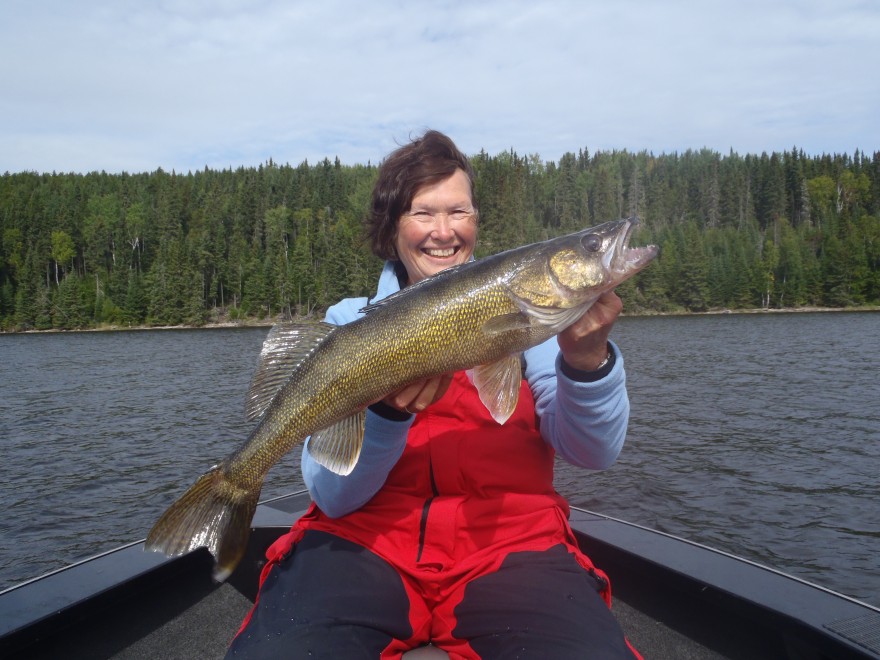 The only constant anyone fishing Lac Seul this time of year can expect is change. This week gave proof to that. Water temps came down and the walleye were found on lots of different types of structure and in more varied depths – our guides reported 27 to 29 inch fish being caught on sand and mud flats in 15 feet of water, and off rock and sand in close to 40 feet. But if the depths and locations where fish were caught changed, the presentations they responded to best remained the same. Almost all our big walleyes this week were caught by anglers using subtler presentations. On the windy days out on the big lake, the guide staff emphasized in their reports that good boat control was essential to keep anglers using light jigs and fishing straight up and down over key spots on the structure.

Over the course of this week a total of 25 anglers fished with us, and our guide reports averaged 23 walleyes over 18’’ each day. We caught and released 18 walleyes over 27 inches, with 6 over 28 inches including a 29 and 29.5 incher caught by a father-daughter team who have been fishing with us for quite a few years now.

The guide staff have been waiting and looking for it, and this week the Northern Pike in Lac Seul started acting like it was fall. As the big pike started responding more aggressively to the lures they saw, quite a few of our anglers chose to change how they spent the majority of their day. Most of our boats spent at least part of their day casting and a lot of our boats devoted the majority of their time to pursuing big pike.

Every year, as September rolls through, lake surface temps steadily come down. As this week progressed the surface temp fell more quickly than usual, and by the end of the week we ended up with a layer of cooler water on the surface and warmer water below. We found some big pike in the remaining weed beds as usual this time of year, but as that surface layer of water cooled so did the weed bite. Later in the week, working deeper running lures off rock points directly adjacent to deep water also produced a lot of our big fish. For the week we caught and released 14 pike over 37 inches, including 3 over 38, a 40.25 and a 41 incher.

With just 10 days of fishing remaining in the 2014 season here at ‘the Wheel’, I’m looking forward to reporting on the big pike hunt to come, and whatever change Lac Seul decides to bring us next week.