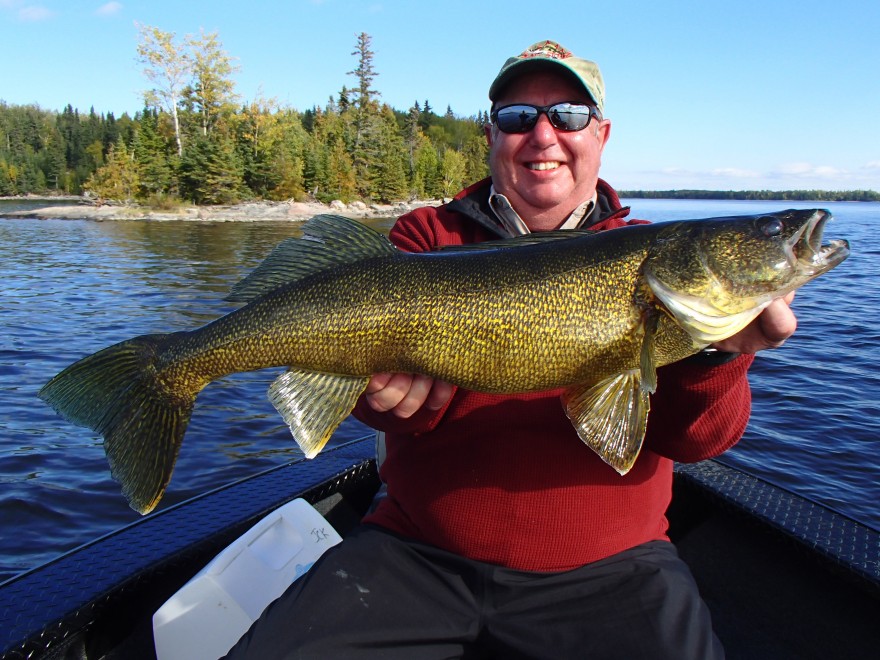 The 2014 guiding season has come to a close for us here at Silver Water Wheel. We do have one more boat fishing just one more day with the lake to themselves, but other than that our boats are officially off the water for the season! And it was a good week to finish our season on. The first half of the week had a lot of our boats hunting for trophy pike, with good results. The big pike were found on rock when the weather was less pleasant, but popped back into the weeds quickly as soon as we got a little cool sunshine. All the big pike were caught casting but there did not seem to be any one thing they were looking for. They answered to a wide variety of baits, anything from spoons to spinnerbaits, bucktails, or divers. During the past 10 days since our last fishing report 35 anglers fished with us and we caught and released 29 pike over 37 inches, with three 40’s, three 41’s, two 42’s, and two 43’s.

The second half of the week almost all our anglers focused on Walleye – also with good results. There were some high volume days out on the main-lake summer type sand structures, the highest daily total was 63 walleye over 18’’ on the guide sheet. But our big walleyes this week came from rock structure at transition depths and locations. The guides reported a lot of our big fish being caught using light jigs to work underwater rock points and shelves on the way into bays around the lake, but some of the best big fish bites came by trolling these structures and the flats around them – using speed to trigger responses from otherwise negative fish. In the ten days since our last report 35 anglers fished with us, and we caught and released 30 walleye over 27 inches, including eight at 28 inches, and four over 29 inches.

Here at the season’s end, we always look back over the summer and from a guide’s perspective some things really stand out about our 2014 fishing season.

The Walleye did not follow their usual progression this year. The late ice out followed by immediate warm weather jumped the walleye to transition locations early, later cold fronts and mixed up weather moved them back to spring spots some days and out to deep water other days. They settled in to more usual patterns through the summer, but it was one of the most unusual and unpredictable springs\transitions we’ve seen.

A big change from the last few years is the amount success we had jig fishing instead of trolling gulp at speed this year, especially in mid-summer. The big walleye clearly answered better to jig fishing this year, while over the last few years speed produced. The root cause of those kind of changes may be debatable (the guides debated that a few times this year!), but to a guide the lesson is clear – when fishing Lac Seul be flexible, be versatile, and be prepared to change tactics every day.

We also noticed a continued increase in the top end fish. This season there were 3 walleye caught that reached the 31 inch mark, and two northern over 47 inches. While making predictions is always risky, when we put those numbers together with a steady increase through the past years in 27+” walleyes and 37+’’northerns, the guides are looking forward to an increase in numbers of top end fish for both species in the years to come.

On the other hand, some things did remain as expected this season. We experienced some phenomenal weeks for big Pike both early and late season again this year. For guides, those weeks are something we anticipate and will aggressively search for next May and September.

For me, the changes Lac Suel throws at us each year, week, and day are what makes the hunt a hunt, and what keeps me searching and trying different tactics all through the season. I think that’s what makes fishing Lac Seul interesting and fun for anglers and guides day after month after year.

On behalf of the staff here at Silver Water Wheel this fall, I’d like to pass on a sincere thank you to all the guests who singled out to us the staff members that had gone the extra mile for them or done an exceptional job during their stay.