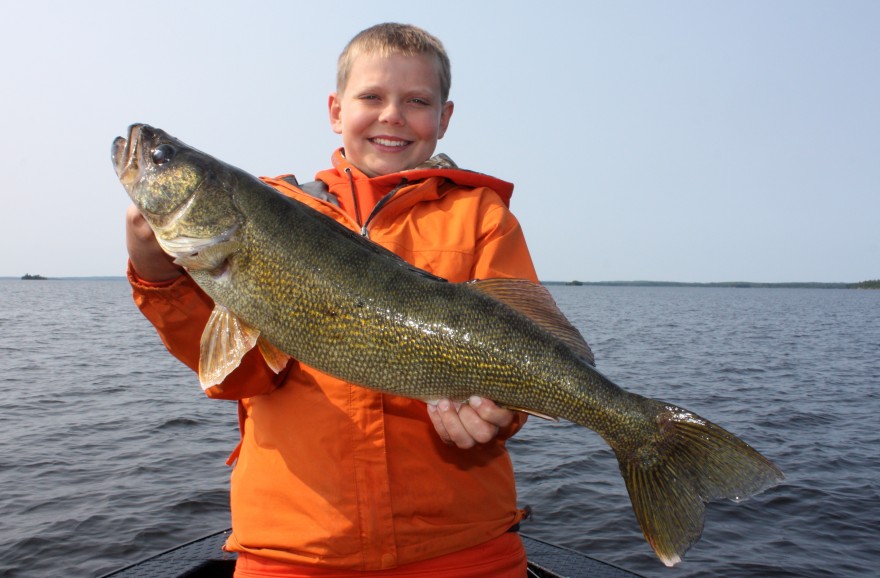 I was talking with one of my most senior guides before writing tonight’s fishing report. I asked Jesse Wright to give me his synopsis of the week. He said, “It was good…. But it was Tricky. I mean I had one of my most productive days of the year for size and numbers and I followed it up with a day where I got smoked.” We both agreed that our version of “smoked” these days is still very relative and is far better than an average day 5 years ago. The top end of the Lac Seul walleye fishery is just that much better now than it was back then.

The biggest difference in the walleye fishing this week in comparison to the last week in July is that we didn’t see the ridiculous amount of really big fish. Volume remained very high across the board but a few of the bigger ones managed to elude us on those flat calm warm sunny afternoons. For the week we caught and released 46 walleyes over 27 in., including 4 – 28s, and 5 – 29s. Those results are a drop from last week, but would have been one of the absolute best weeks of the year in 2008. Volume remained very strong with guide sheets averaging 45 walleyes over 18 in. per day. The highest daily total of 150 broke the old lodge record.

It continues to be a “spot and stalk” bite for walleyes. We experimented with Gulp and speed on a regular basis and the fish just aren’t up for it. We caught a few, but the Big Gulp bite just has not kicked in this summer. Jigs and live bait in ¼ to 1/8 were the most productive presentations by far.

I simply do not stop on a spot without scanning it first these days. You just have to eliminate as much water as you can before you slow down. In the past we would have relied strictly on spot on spot structure to key on this type of bite. Mid to deep water flats were extremely important this week. If the walleyes are deep on the sand flats and aggressive, we all reach for the Gulp and move fast. When the walleyes are podded up in groups on the flats and neutral to negative, you have to hunt with sonar first or you are wasting time. This week, we had to find them first and then slow down with slower presentations. Even then, we caught 1 out of every 10 we marked and just about every fish coughed up big smelt. So, Yes, “It Was Tricky!”

This is probably one of the best years for deep cabbage weeds that I have seen in a decade. It makes the key spots for big pike a little easier to find and we have had a small percentage of groups spend time chasing them. They found fairly good action for small fish and steadily improving results for bigger fish. For the week, we recorded 6 over 38 in., including 1 – 39, 1 – 40, and 2 – 42s.

I didn’t mention the weather in the intro, so you know it wasn’t a huge part of the story. It was a Goldilocks week, it wasn’t too hot, it wasn’t too cold, it wasn’t crazy, it wasn’t even worth talking about…. It didn’t hurt fishing, but it didn’t help either. It was Just Right.

I can’t tell you that the lake level is falling much, but it is not rising any higher than last week.