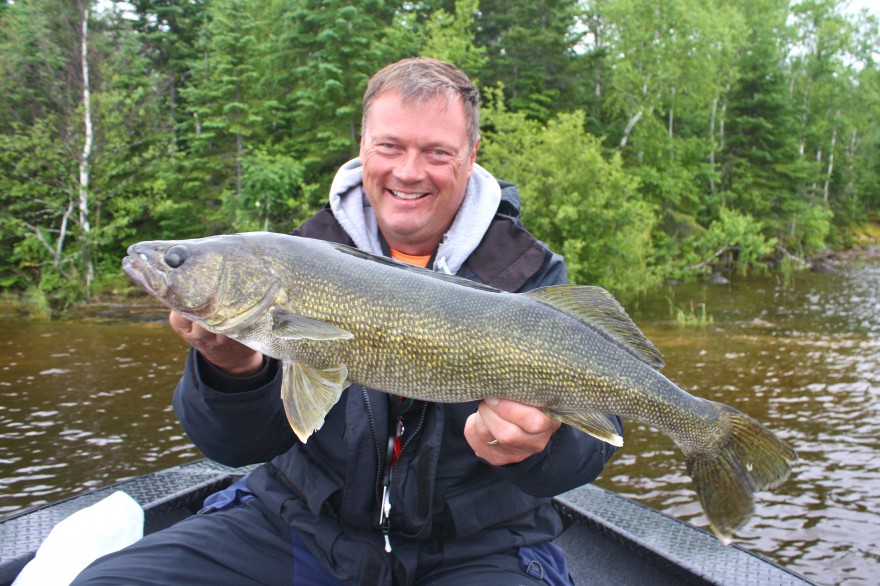 Tell me if this sounds familiar. This week’s fishing was once again dramatically affected by a huge weather system that blew through during the beginning of the week. Tuesday was Canada day and my staff postponed the beach party because of the cold, windy, and rainy conditions. Usually by this time of year the summer pattern has set in and we will get the occasional showers or T-storm. This was another May /June like blow out with sustained 30+ mph winds ending with cold rain. Lac Seul is FULL! We are almost at the extreme high water mark.

The weather did improve towards the end of the week and the fishing rebounded quite quickly, but to put things into perspective, the main lake surface temps were below 60 degrees F for the first week of July. That never happens up here.

Walleye fishing patterns ran across the spectrum. We found walleyes in super shallow spring spots, down deep on main lake rock, on the shallow side of main lake summer sands, in front of the weeds, and everywhere in between. The fish are phenomenally scattered.

For the week, we caught and released 68 walleyes over 27 in., including 16 – 28s, and 2 – 29s. Numbers were way down during the storm, but improved during the end of the week with guide sheets averaging 35 walleyes over 18 in. per boat per day. The highest one day total was 68.

Typically, our big plastics bite is full on at this time of year and despite many attempts, the results with big jigs and Gulp have been modest at best. Most of the guides are rigging 1/8 oz jigs for live bait even when they drop down to deeper structure. The shallower fish tend to be more active, but the deeper fish can still be caught if you gear down with light jigs and live bait.

The Bass are a head scratcher. Some areas have been productive, but other sections of the lake that historically have been good a little later in season are a bust. We caught bass in 10 – 12 ft. while jig fishing for walleyes. It is either going to be an extremely late spawn or some may just skip it. Compounding the bass fishing troubles is high, dirty water and a tremendous amount of new weed growth. There were a couple of good bass days and the highest one day total was 97, but there were also many groups that opted to focus on walleyes. For the week we caught and released 6 – 19s and 2 – 20s.

Pike fishing was attempted by a few, but most were incidental catch while walleye fishing. We caught and released 13 over 37 in., including 1 – 39, and 3 – 40s.

Regardless of what the weather is like for the 2nd half of the summer, 2014 will go into the books as an all-time extreme. What is even more surprising is how consistent the big walleye production has been despite the challenging conditions. I know that there are some bites and locations that we would have missed or not found 10 years ago, but the accumulation of knowledge over the years is a huge asset to a highly motivated guide crew.