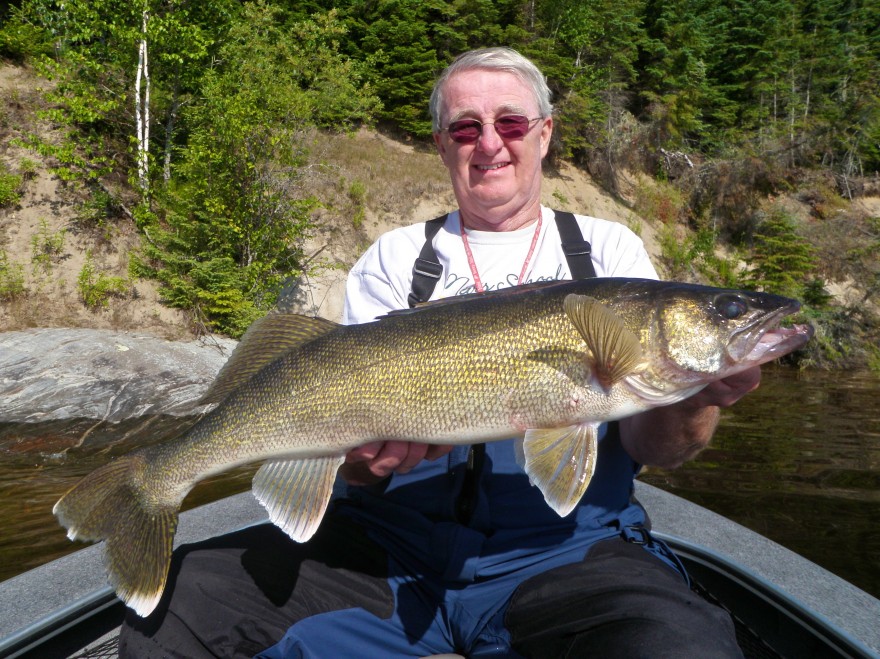 It was a bang up week of walleye fishing on Lac Seul. The stats for both volume and size were excellent, although many of our long term guests were surprised that it was a “spot and stalk” bite rather than a high power plastics trolled at speed game.

For those that don’t fish with us or who haven’t followed our reports, I will try to give a brief bit of background to explain the difference in speed and presentations from what we would consider normal for this time of year. During the traditional summer peak, we use speed and large Gulp Alive baits on big jigs to cover water quickly and trigger big walleyes. That bite is not working.

Instead, the guide crew is relying on electronics to cover water quickly, locate fish and then slow down with lighter jigs and live bait to catch fish. The trick is to figure out what kind of a mood the fish are in. Locate a pod, drop a ¼ oz. jig down, watch the fish rise up on the graph multiple times on a bait only to refuse it, and then you know that you are dealing with negative fish. Your choice is to gear down or move on. Make that decision correctly 6 out of 10 times in a day and you’re a hero. Miss that group of fish by 5 feet in depth or arrive 3 hours too early 4 out of 5 times and your results may not be as strong. You still caught fish, but you might have missed the big ones and that is the story of this week.

It is hard to describe, but it was a strong week with a subdued bite. One of the senior guides at round table said, “… It felt like a slow afternoon, compared to the morning until I looked at my sheet and realized that I had filled the back (60 walleyes over 18 in.) with 2- 25s, 3 – 26s, and 2 – 27s. When you have to gear down, it takes time to find the pods and then one or two 10 – 20 fish flurries makes up for an hour of searching…”

Jigs and live bait were the key. When the fish were active, 1/4s worked best, but when the bite slowed down during flat calm conditions, 1/8s and minnows were the only way to go.

It was easy to spot an SWWL guide boat in the groove… The guide wasn’t fishing, he was holding the boat in one place, netting, baiting, and writing. Main lake sand structures were most productive, but there was some occasional rock bites as well.

Mayflies were on the water this week and the lake level finally dropped a few inches. It continues to be a wacky weather year, but no one is complaining.

The weedbeds are larger and deeper than they have been in years past and the pike are just starting to move back in. There were 10 pike over 37 in., caught this week topping out with a 42. It wasn’t a great summer pike bite, but it is improving. We missed the peak of the Bass bite this year and will likely not have much more to report for smallmouth until the spring of 2015.