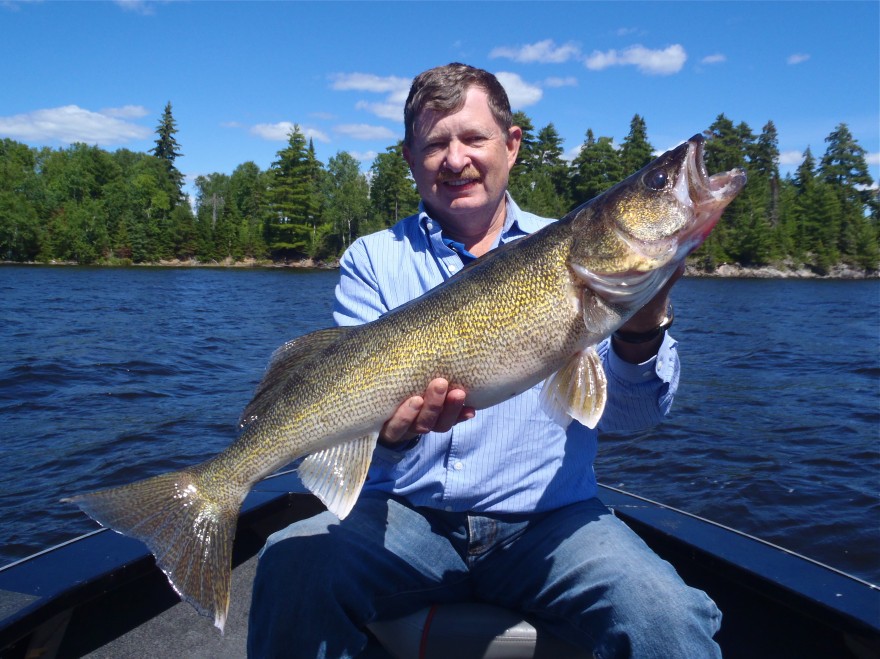 One of my favorite things about Lac Seul is that it is huge and that there are literally thousands of fishing spots. My guests that have fished in my boat know that I love to move. It doesn’t matter if we are catching fish or not, I still start every day with 20 – 30 ideas and I am disappointed if I don’t get to try at least half of them. So when my round table reports this week began with spent the morning at…. or fished all afternoon at…. then you know that something is going on.

What happened is that summer arrived. It didn’t show up in the form of blazing hot flat calm sunshine that pushes walleyes into the shallow weeds, it came with hazy, humid days that were warm but not quite hot enough take your bibs off, especially when a breeze or shower kicked in during the afternoon. The walleye bite was hottest on main lake deep water sand structure this week. Some deep water rock worked, but it wasn’t the bite that made you stay all morning. All of the fast action bites that were too good to leave were on deep sand. More accurately, many were associated with deep sand, because sometimes the most active fish were up in 18 -24 ft. near 40 – 50 ft.

This was not a cover water and find the active fish with Big Gulp bite, this was a locate the fish on deep water sand and determine how slow you have to go with live bait to catch them. Good electronics were critical. It was more important to locate the fish first and then grind them out. Miss a pod or two on a specific spot and you might as well move on.

Most guides relied on ¼ oz. jigs and minnows for the week, but there were times and places that we fished heavier and lighter. I never change a jig for color, I always change a jig for size. Match the weight, with speed, activity level, and depth of target and then you win. There were many, many different winning strategies this week, but not a single one had anything to do with jig color.

A few groups chased pike this week and there were 5 over 37 in. with 1 – 38 and 2 – 39s. The guide crew has by default put an end to Bass fishing season. It was tough. And the high dirty water just makes it worse. Another week of hot weather could bring the Pike up into the weeds, but most of us will be walleye fishing anyway.

It appears that the high water level probably peaked this past week. On Monday, we had a heavy North wind and the waves were breaking on the lawn and over the fixed dock. I have never seen the lake that high. It looks like lake levels have fallen a few inches since then, but it remains extremely hazardous for big floaters on the lake.