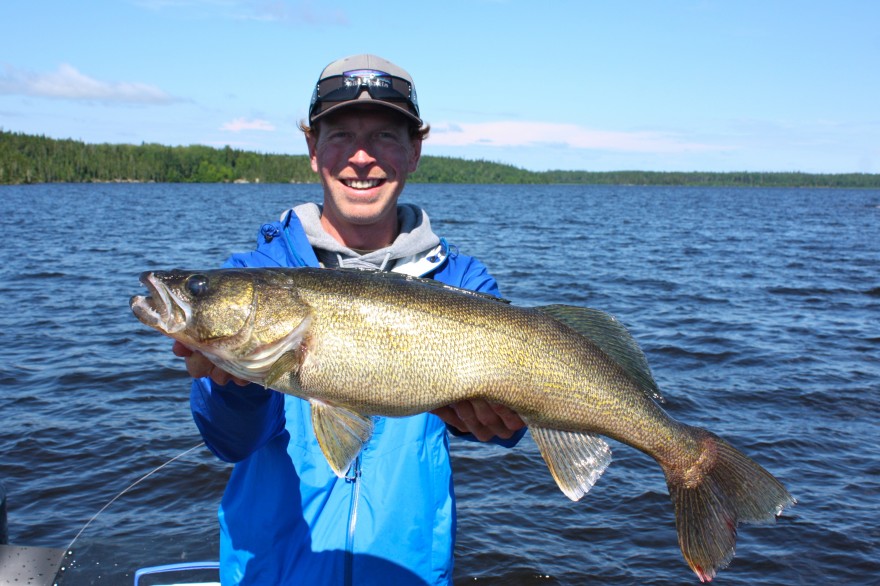 The effects of a historic late ice out and the volatile spring weather can still be felt this week. Summer has still not arrived on Lac Seul and even though the weather is improving, we have yet to settle in to what we would consider normal patterns. Despite the weird year, walleye fishing was good for size and great for volume. We don’t know about the bass and fishing for big pike was not productive.

I was guiding friends for the first half of this week and Steve asked me if I minded if he dropped a camera down on the spot we were fishing. I said no and he lowered the lens into 27 ft. of water on a main lake sunken island. The visual on the screen was just what I expected, but this camera had a temp sensor and it displayed 62 degrees F at depth. Surface temps that day were 64 degrees F.

The group had read my fishing reports and had joked about my “blender” reference from the week before, but this single piece of information truly put things into complete perspective for me. It is all about the food. If the temps are the same from top to bottom and from side to side, then the baitfish can and will be everywhere. And they were. And so were the walleyes. During the first half of the week, there were big walleyes caught in 10 ft. and 30ft. Towards the end of the week, many populations of walleyes began to trend shallower. The smaller fish always go shallow first, but there were many 23 – 27 in. walleyes caught in 10 – 12 ft. by weeks end.

Many guides spent time pulling Gulp and big jigs with speed for very limited results. Live bait was the answer this week. Again, it is a strange year!

There was a substantial and unwarranted amount of effort spent chasing big pike this week. Transition for pike on Lac Seul is usually the third week of June as we bass fish and it doesn’t feel that bad. This year, Transition is this week. There were a few big pike caught off main lake weed beds, a few caught in the way back skinny water, and once again the rest were in between. It was tough piking. For the week we only had 3 over 37 in., including 1 – 38 and 1 – 41. I can personally attest that it was a waste of time that could have been spent smashing walleyes, but as good guides, our job is to check it all out.

Windy conditions and colored water kept many guides from Bass fishing. Those that checked it out, proved the point. It is very tough to justify 1 bass per hour compared to 6 walleyes per hour. For the week, we did catch and release 4 bass over 19 in., including 2 over 20.

It will take sunshine and warm weather to push the walleyes all shallow, but we have been close this week. As always, the weather will once again be the story for next week’s fishing report.