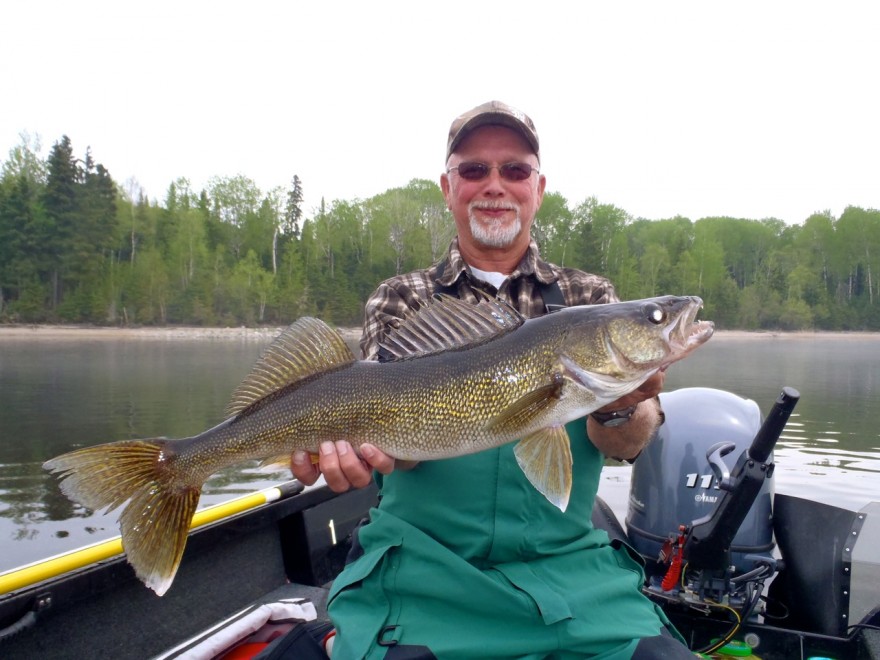 The sudden hot weather at the end of May actually has balanced out the effects of a late ice out. Surprisingly, this week was a fairly normal first week of June. The big pike are on their way out of the shallows, the smallmouth are just starting to move in, and the big walleyes are in high gear.

To put things into context, the main lake temps are in the low 50s, many of the transition and back water bays are in the 60s, and some of pike spawning areas have already been over 70. That is about as normal as you can expect. The only difference is that the main lake heating up as fast as it did, has resulted in many main lake transition areas holding walleyes much earlier than I expected. Without the massive temperature difference between main lake and back bays, there just wasn’t as much motivation for all the walleyes to push back into the shallow back water bays.

Most of the big fish were caught off the first break in 10 – 15 ft. of water, but there were also a few big fish caught along with numbers of smaller fish pitching gulp or plastics into the shallows. Pollen is such an important indicator for hot shallow water bites this time of year. You can see yellow streaks of pollen pushed into inside corner shorelines and these often coincide with pockets of warmer water and bait fish. Many times we find a pod of fish by pitching shallow and then we move out deeper looking for the big ones.

The bass actually showed a little more resistance to moving up shallow in response to the warmer surface temps. We tested out our normal early spring spots and found a few, but they are still not up in force. For the week we caught and released 22 over 18 in., including 6 – 19s, and 1 – 20. Some were caught as incidental catch while pike or walleye fishing. Another week of warm or even normal weather should begin to push them into the shallows.

Despite the Horrific Winter and Spring, it was a great first week of June on Lac Seul. Nothing makes a boat of anglers happier than their guide sliding the net under multiple 5 pound plus walleyes in a day.