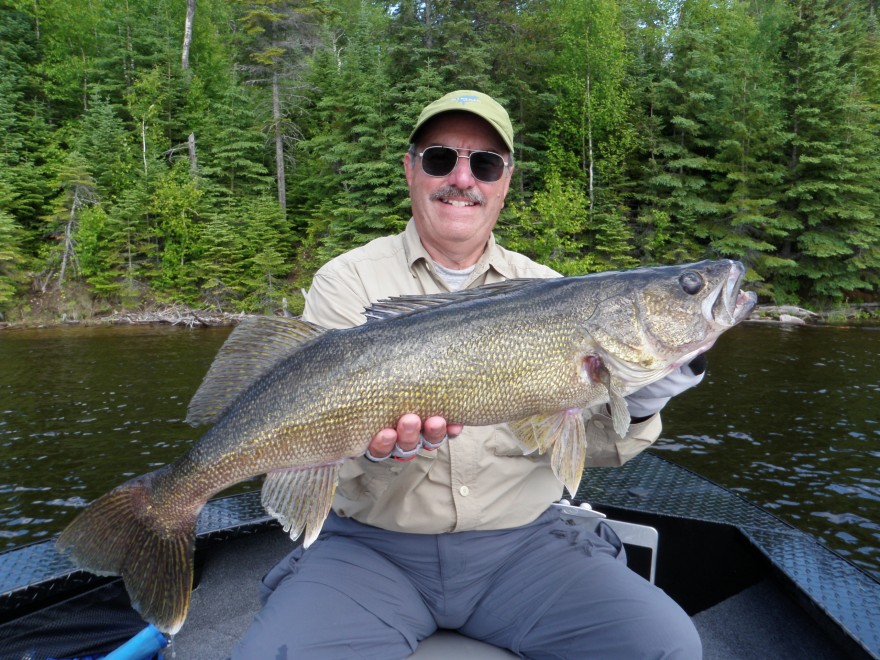 This week was once again dominated by unsettled weather. Monday was another wind driven rager with a ½ inch of rain. Lac Seul water levels are approaching the highest that I have seen them and are definitely at the highest I have seen for this time of year. You actually have to step up onto the floating docks from the fixed dock. There are floaters everywhere. I saw one today that was 3 huge ancient trees entwined together. If you ran into it at speed, I don’t know that you could get your boat off from it. Especially with just a slight chop, it is very hazardous driving on the lake right now.

The continued unsettled weather resulted in more unsettled fish locations. The “blender” is the most common term that SWWL guides use to refer to the current conditions. There were catchable walleyes on main lake rock in 35 ft. of water and at the exact same time there were 25 and 26 in. walleyes being caught by guides bassin’ and pikin’ in 2 – 5 ft. of water, way back in the skinny. The fish are absolutely everywhere. Tonight at round table, I found out that I was 10 ft. too deep on one trolling pass and 10 ft. too shallow on another that I fished earlier in the day. My result was zero and the other 2 guides hit a good streak. Not a great streak, but 4 on the sheet or 8 on the sheet always makes a difference at the end of the day.

It was definitely hard work guiding this week. Fish deep for lethargic risers? Fish shallow sand? How shallow? How fast? Summer spots? Spring spots? Transitions spots? They all held some fish. And 20 minutes later and an hour later, you find yourself having to run down the same set of questions again and again. Finding a big fish did not mean that you solved an equation. It just meant that it was probably time to move and search for another big fish at a different spot.

There were some really good 1 day patterns put together and we did catch some big fish, you just weren’t picking one spot and one pattern and spending the day on it. For the week, we caught and released 36 walleyes over 27 in., including 8 – 28s, 4 – 29s, and 1 – 30. Volume was all over the place, but in the end the average was the same as last week with 30 over 18 in. per boat per day.

The bass fishing improved in some sections of the lake, but remained behind in others. It was never full on, but we did have quite a few groups apply concentrated effort chasing bass. For the week we caught and released 147 over 18 in., including 28 – 19s, and 3 – 20s. There were no 100 bass days and I don’t know if there were more than a few 50 bass days. I would say that the peak is still on the way. Tubes were the bait of choice, but there were some mornings especially, when a Mann’s Baby 1 minus twitched on the surface outperformed every other presentation. The key was to work it like a skitter pop, twitch it, let it sit, let it sit, twitch it, let it sit, let it sit, let it sit, then twitch it. Instead of balking at the pop R or the skitter pop, when they came up on the Baby 1 minus, they ate it. The results were significant.

During the best of times, fishing for pike during transition is a crap shoot. With a late spring and unsettled weather this year it is even more chaotic. There were some nice pike caught this week with 7 over 37 in., including 1 – 38, 2 – 39s, and 1 – 40. All of those fish were targeted, but they were all caught in dramatically different types of water. The Blender hit the pike as well.