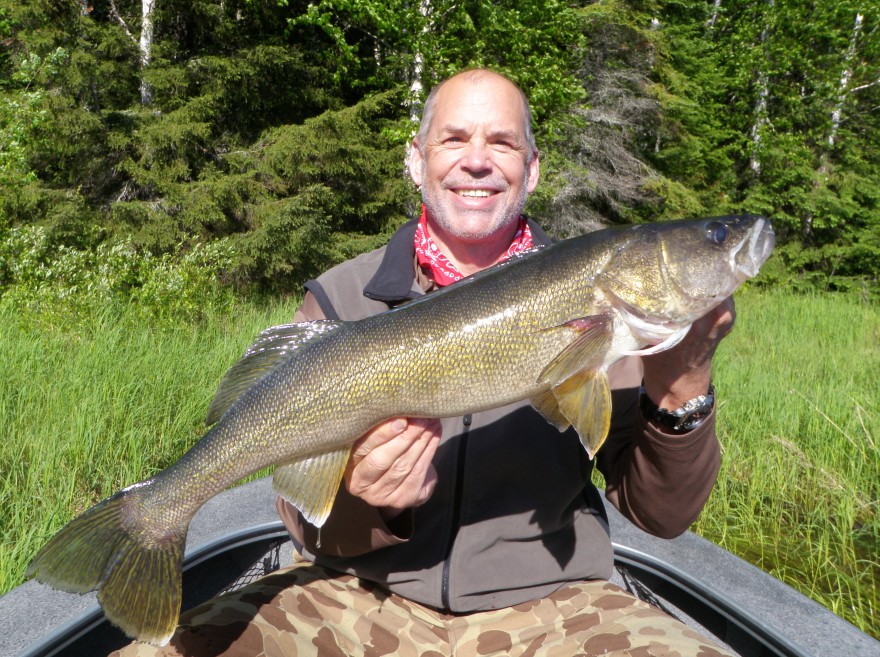 I can’t remember the last time that I didn’t have some extreme fishing or weather condition to talk about and this week was no exception. Along with the massive weather system that closed out last week’s fishing report, we were again subjected to two more huge fronts with rain this week. We are talking inches of all day rain. I cannot remember seeing Lac Seul this high at this time of year. Water levels are already higher than they were at the peak of last summer.

Big weather changes result in big changes in fishing patterns. Senior Guide Brett McCallum described it best, “hot weather at ice out sent walleyes on to the main lake fast, but these last three blasts of cold rainy weather have acted as a complete RESET. There are still walleyes on main lake transition spots, but they are very hard to catch. The walleyes that weren’t in the shallow back water bays have finally moved back in and that is where many of the big ones were caught last week.”

Main lake walleyes are deeper and require slower presentations to catch. Big walleyes in “Retro” spring time locations are the first to respond to big plastics at speed and we saw many of our biggest walleyes this week caught on Gulp pulled fast.

It was a week of tough choices. Senior guides know that they have to check out the “next” step areas, but the options contracted with the onset of bad weather. We still caught a bunch of big fish, but the major story this week was the result of the weather, not the quality of the fishery.

The biggest effect of the weather was on the Bass fishing. This is the time of year that groups that love smallmouth book their trips knowing that the timing is critical. Well it is, and last week’s weather kept surface temps in the back water bays below 62 degrees F. The bass boycotted. There were a few up, a few deep, a few back in the super shallow bays feeding, and who knows where the rest of them were. I cannot remember a single season before this where we had not hit our bass peak by this time. Despite significant effort to find them and pattern them, we only caught and released 45 Bass over 18 in. for the week, including 3 – 19s, and 3 – 20s. The bottom line is that when the warmest backwater bays are only at 60 degrees, the big bass just have not moved into the shallows.

The Bass definitely felt the reset.

I like to be right. It probably is a character flaw, but it is a fact about me that I know. And this week I was wrong. I did not expect the biggest pike to move back into the super skinny water, but some of them did. I do not know why. Water levels may be part of it, the storm fronts may be in the mix, and I have to remember that 1 month ago there was still 1 foot of ice or more over most of the lake. The guide crew know to take nothing for granted, and especially when the fishing is tough, they take chances to figure out what is going on.

We had a few groups chase big pike this past week and the results were mixed and unpredictable. For the week, we caught and released 9 over 37 in., including 2 – 40s, 2 – 41s, and 2 – 42s. Bright spoons were the most productive presentation and many of the really big fish were caught back in the “spring time” skinny water.

Readers of this post have different agendas and motivations. I feel that my job is to post the conditions, facts, and relative trends as best as I see them. The biggest surprise was how dramatically the bass migration was slowed by the bad weather. It was also significant to note that even though the weather hurt volume for the week, we still caught a nice bunch of Big walleyes.

I keep trying to stop predicting, but the Bass must move into spawning mode soon, the pike always move to transition spots when the weeds are half way up, and the walleye bite should get snappy when surface temps creep into the low 60s across the main lake. Instead I will watch the weather closely and like all of my guides, we will continue to search and push to find that weird weather answer. The big fish are out there this year, we just have to work through the variable weather to find the pattern that works. And a few weeks later it will all change again. And that keeps it Fun!