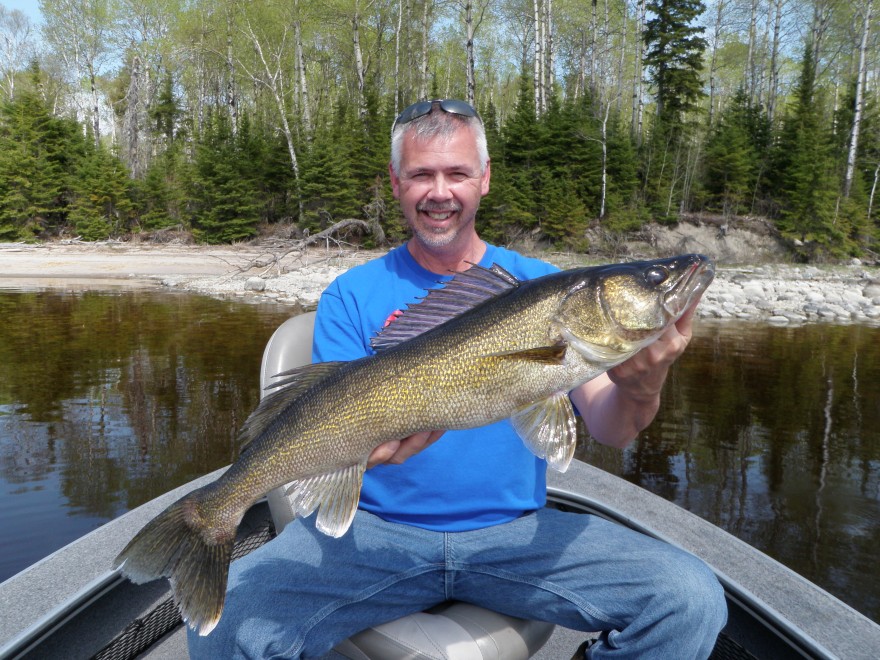 I know that many of you reading this report south of the border are wondering why it took so long to post the first fishing report. Those of you living closer to the Canadian border already know. It was a Horrible, never ending winter. I planned to arrive at the lodge 5-6 days later than normal and that was 2 weeks too early. We had to plow to get in, there were 5 – 6 foot snow drifts and 2 ft. of ice on the lake. I will spare you the details, but it was the most difficult opener that I have ever experienced. The official ice out date for Lac Seul this year was May 26. That is 3 days later than the previous record.

Spring arrived on May 23 and lasted for 6 hours. The last ice went off the lake under a blazing “summer” sun. Missy and the kids arrived on May 25 and the high temps have been at or over 80 every day.

The extremely late ice out and surprisingly hot weather resulted in the most unusual spawning conditions that we have ever seen. Both main lake walleyes and Pike spawn occurred at the same time. The walleye spawn was more intense than usual. And we found more than a dozen new main lake spawning locations this year.

We had to cancel all of our first week guests. I tried to steer most of our 2nd week guests away as well, but with no dates available later in the year, some chose to come up anyway. The first few days were tough. We started fishing with only 8 miles of open water with the main lake still locked in ice.

Walleye fishing was a different story. It was cool to watch them spawn and to discover new spawning areas, but getting them to bite was not easy. We fished both spawning locations and isolated, warm, shallow water areas that attract post spawn fish this week. Both produced at times, but at the end of the week, there were 50 times more locations producing walleyes than at the start of the week.

Locations that held zero walleyes 4 days ago with surface temps at 42 degrees, today produced great volume and size with temps pushing into the mid-60s. Today was the first day of truly good walleye fishing. Many of boats caught lots of fish from a number of different locations. For the week we caught and released 20 walleyes over 27 in., including 5 – 28s, and 2 – 29s.

During iced “Iced-in Guide Training Meetings” last week, I told my new guys, that in just a few weeks we will have forgotten about the days of staring at stubborn ice. It may take a little longer to forget this year, but it is beginning to feel like a good Lac Seul walleye fishing season again.