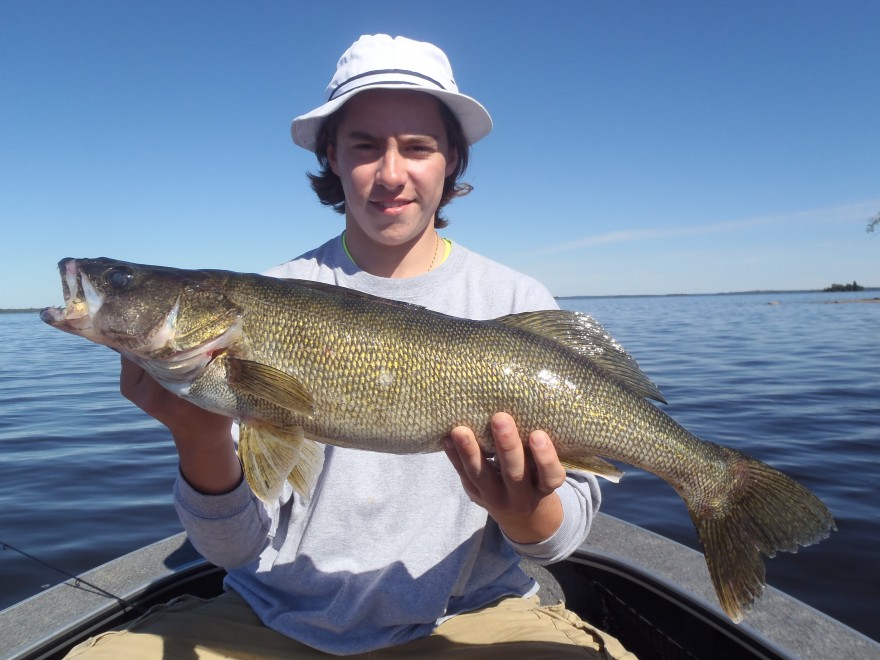 “Winter is Coming” – House Stark from the Game of Thrones.

That is what kept going through my head all week. It wasn’t just a nice little hint of Fall, with a cool morning this week. It was full on, time to think about closing up camp weather. The entire week was cold; lows in the 40s and highs almost in the 60s, but not always. It rained, the wind blew, and then the rain turned cold, and then it turned really cold and windy. The coldest morning was 45.

Brett McCallum, my most senior guide and Lodge manager has been on Lac Seul for well over 20 years and even he was beside himself…. “I have never seen the entire first week of August so like mid-September …” And if the weather shocked the guides, then it did the same to the walleyes. The most significant change was the disappearance of the big fish. Areas that had been routinely producing consistently big walleyes, now only turn slots. Main lake deep water sand structures produced many small fish but very few bigs. We still managed to turn some nice fish, but it was much more difficult to find walleyes over 26 in.

I was stubborn and still pulled Big gulp on jigs at speed just to see. I turned a few fish including a 26.5 today, but overall it was a “dead sticking light jig bite.” After guides fished 15 spots 5 different ways, they resorted to gearing down and slowing down over groups of marked fish. When the bite gets tough, the lightest jigs fished the slowest turn the most. The tough part is picking your spot to fight the slow fight. Pick the wrong one and you just burned an hour of daylight. Find the right one and whatever you do, don’t leave! The method this week was “find them and Grind them.” It wasn’t pretty or flashy or warm, but we still caught good fish.

The best point made this week was by Tyler, one of my second year guides. He complained with us, but as the new stats guy, he then pointed out that our new “not so good week” for 27s was twice as good as our good week for 27s on a nice week in 2008. My comment: Exactly… These are the beginning of the best of the “good ‘ole days” in fisheries terms, but the weather trumps all fisheries trends and humbles guides every time.

I go to sleep looking at the weather, I wake up looking at the weather, as I plan my fishing day, I stare at my map, then look out at the lake and then think about the weather. This week, the stats took a hit because of the weather. What surprised me is that guests at checkout were happy with production and not that concerned about the cool conditions. Several told me that they were happier that it wasn’t 90. Me, my stats, and my mildly arthritic knuckles quietly disagreed and looked forward to a warmer forecast for next week.