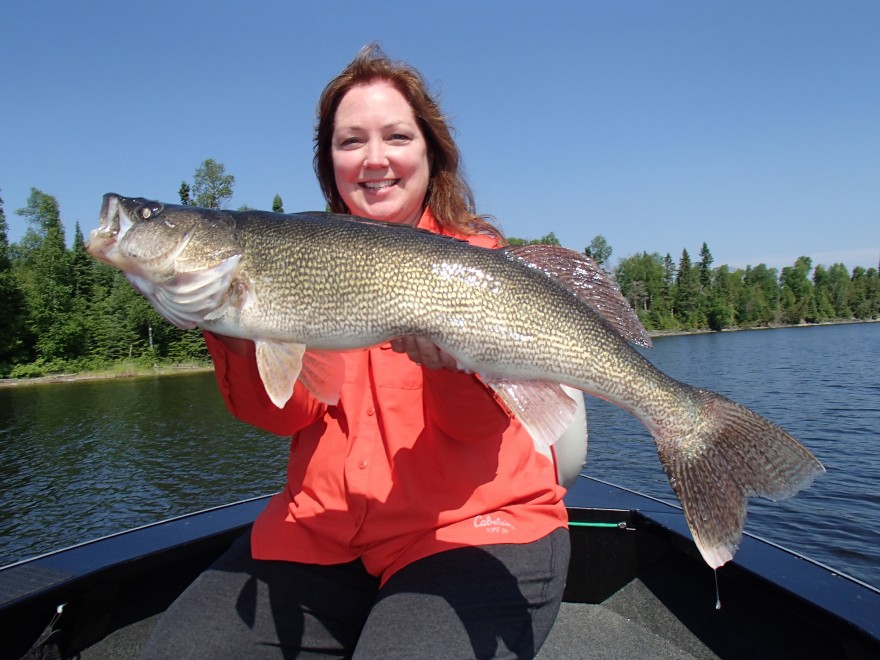 I have spent the last few weeks describing the rapid increase in the numbers of big walleyes that we are now catching in the south basins of Lac Seul. There is zero doubt in my mind that the fishery has changed dramatically in the past 5 years. We now have a very large class of 23 – 28 in. walleyes that make up a greater percentage of our catch than we are used to seeing.

With the change in the population trend established, I am going to begin focusing fishing reports more on how recent weather patterns have affected the day to day fishing results. What will surprise people is that even with that incredible list of big walleyes caught and released this past week, there were actually quite a few slow periods.

We had several days of blazing sun and flat calm conditions that resulted in very brief and sporadic shallow water walleye bites mixed in with some quiet bites. There were multiple reports of guide boats fishing the same areas at different times with dramatically different results. When the wind picked up, the walleyes were snapping. It was a largely shallow water bite this week with most ‘eyes caught between 6 – 15 ft. of water. The deep side of weed beds was a major pattern, but there were also many big walleyes caught on the basin flats suspended in 10 – 14 ft. over 16 – 30 ft. of water. The suspended bite is tough, but the guides watch their graphs and when we see fish suspend we use a combination of speed and jig size to target fish. Most of the suspended walleyes are catchable, the trick is to find a presentation that matches depth at speed. When you dial it in, it can be deadly. One of our guides worked the same area with many different types of passes and presentations today and finished with 35 walleyes over 23 in. Production was evenly split between light jigs and minnows combos and Big jigs w/ Gulp Alive Plastics.

We did have several groups chase pike this week and for the limited time spent hunting, their results were very good. For the week, we had 7 pike over 38 in., with a 40, 41, 43, and Josh Rogers caught his personal best – 45 in. massive pike on a big spinnerbait.

The bass bite is over in my mind, but groups still spent time working for them this week. As the bite winds down, there were still 14 – 19s and 1 – 20 caught and released.

No matter how great your fishery is, the weather is still the number one variable affecting how many fish are caught on any given day. This week, we had some slow days and some hot days, but overall, walleye fishing was once again terrific in the south basins of Lac Seul.