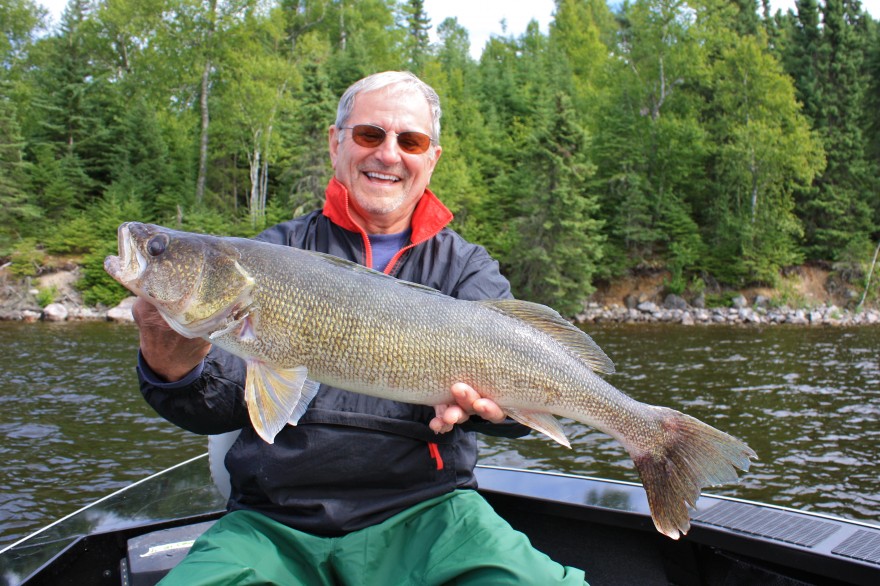 It felt like Fall this week on Lac Seul. Temperatures dropped, the wind blew, the rain was cold, and then the wind blew again. This morning it was 48 and the high temp never made it out of the low 60s. It was definitely an unstable weather week and the fish responded the way we expected them to. Many walleyes pushed deep out onto main lake sand and rock structure. There were still some relatively shallow bites, but most of those were related to sustained high winds blowing on to a shallower sand flat. Most of the big walleyes this week were caught from 20 to 35 ft. of water. With the variable weather, live bait and lighter jigs (1/4 – 3/8) definitely produced better than the big jigs and Gulp Alive plastics.

There was a dramatic movement of walleyes onto main lake sand structure this week. These summer spots were vacant last week. I wouldn’t call them loaded yet, but they were good.

Overall, both production and big fish numbers were off their pace this week due to rough weather. For the week, we caught and released 68 walleyes over 27 in., including 12 – 28s, and 1 – 29. Average walleye volume dropped a little to about 35 over 18 in. per boat per day. Going through the weekly stats, it was interesting to note that there were 102 – 26 in. and 129 -25 in. walleyes caught and released this week. The walleye fishing future looks good!

There was almost no effort chasing pike this week. There was a beautiful 44” northern caught while walleye fishing.