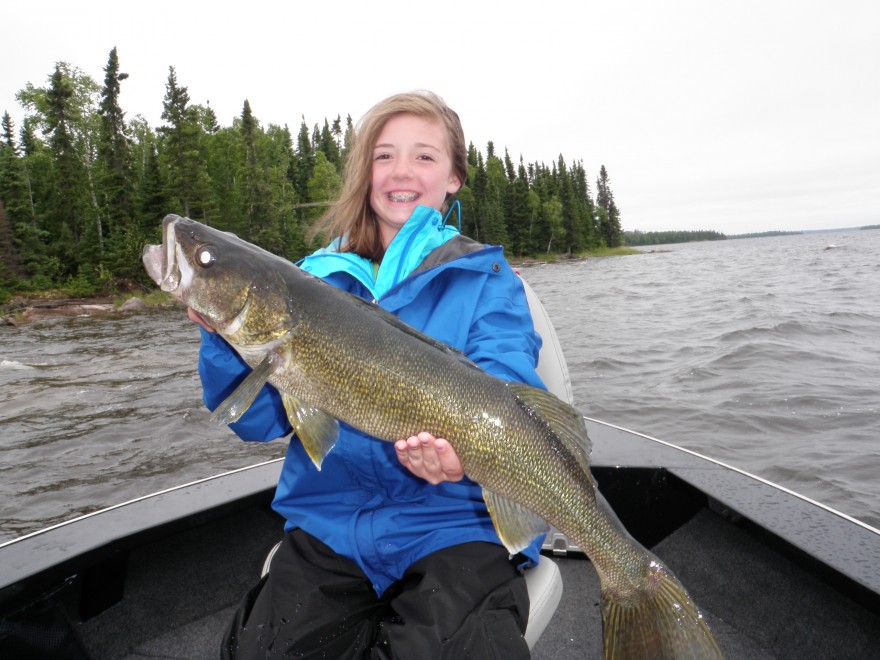 It felt like summer at The Wheel this week. It was warm and a little humid for our standards with the occasional shower, but overall it was just a nice weather week. At the risk of being repetitive, it was also another excellent fishing week in the Southern Basins of Lac Seul.

The mayflies are emerging on the main lake, but it really never affects our walleye fishing. There are actually times that we will locate pods of walleyes suspended beneath the floating exoskeletons in the wind driven current lines.

There are still some walleyes on the deep side of the weed beds, but this week they were smaller with more slots and unders. Most of the big walleyes this week were found on main lake rock shorelines in 12 – 20 ft. or on the windblown sand flats in 12 – 18 ft. Once again, many of these fish were suspended anywhere from 2 – 6 ft. off the bottom relating to balls of suspended baitfish. Guides employed several different techniques to target suspended walleyes. Some reduced jig size and increased speed to float baits on long lines up off the bottom. Others cruised at 1 – 1.5 mph until they located a pod with their electronics and then stalled the boat and fished them vertically with ¼ oz. jigs and minnows. A helpful piece of information is that 1 full revolution of a Shimano 2500 sized spinning reel brings up roughly 2 feet of line. Guides would make a quick estimate how high off the bottom they were marking fish and advise the number of cranks to pull up off the bottom.

It was about 50/50 production between light jigs (1/8 and 1/4s) with minnows and Bigger jigs (3/8) and Gulp Alive plastics. The Gulp ripple shad paddle tails worked well and the Crazy legs jerk shads were also top choices in white and chartreuse.

There was a small amount of effort put into chasing pike this week and the results were modest. We did post photos in the dining room of 6 over 37 in., including 1 – 40 and 2 – 42s.

After you factor in the “new normal” for top end size for walleyes, it felt like a really great mid-summer week of consistent weather and consistent big walleye production. The fish are on the move towards their summer haunts on the main lake. The “usual” spots have been good and we have added several new spots to the summer mix as well.