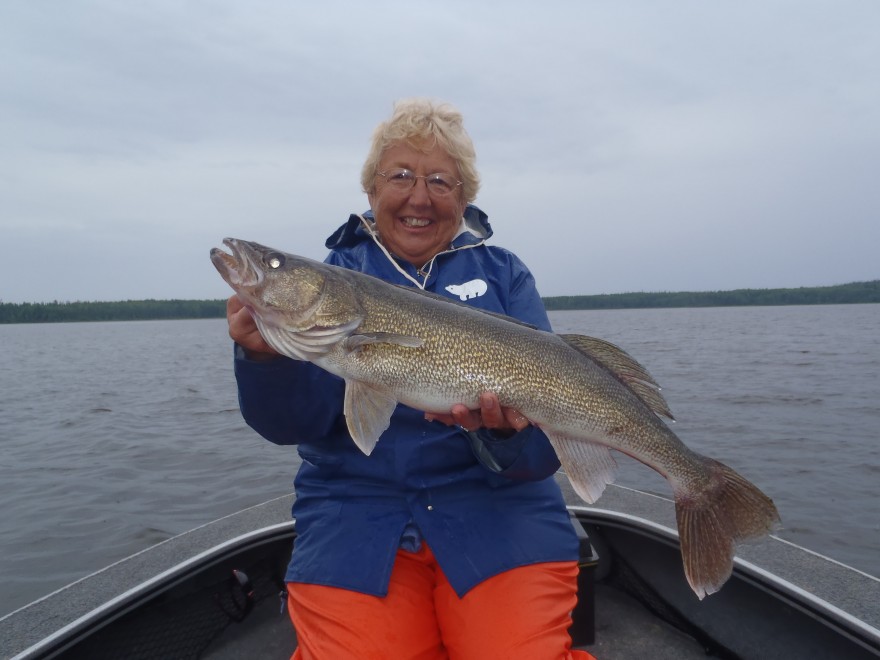 It was another very good week in the south basin of Lac Seul. High winds on Monday along with unsettled showers on Wed. and Thursday did mix up walleye locations a bit and there were some slow periods, but overall production was on the same great pace that we have seen all season. Last week’s report was exceptional, largely due to the fact that there was almost no slow periods with constant and stable weather. When the wind blows 30 – 40 mph, as it did on Monday, you are going to have slow fishing no matter how high quality the fishery is.

For the week we caught and released 78 walleyes over 27 in., including 19 – 28s, 6 – 29s, and 2 – 30s. Walleye volume averaged 40 walleyes over 18 in. per day per boat. The highest daily walleye total was 64, but that sheet also had 25 bass over 16 in. as well, for a total of 89 “sheet fish.” Again, I am not going back to look at every week of stats, but from memory, that total would have been far higher than any week for the past 4 seasons. Yet it only takes a few weeks for both guides and guests to get spoiled.

One of my more difficult tasks is to manage expectations while still trying to give an accurate snapshot view of the week’s fishing experience. When I was doing shows, I always “undersold.” I would much rather lose one booking and have everyone who did book pleasantly surprised that they experienced better than they were promised. In that light and with the previous week’s fishing reports, I have had to begin to deal with the first stages of “heightened expectations.” – “…It wasn’t a bad day, but I still haven’t caught my first 27 yet this week….”

I wasn’t the only guide this week that had a day where I struggled to find shorelunch fish. We all want to chase big ones, but if you wait until 11:00 to shift gears to find eaters, you can get burned, especially with weird weather. On Wednesday, my boat had landed more walleyes over 26.5 in. than walleyes under 18 in. by 12:00.

An awesome fishery is still subject to weather driven bites. It is also always built upon a massive and diverse forage base. When you can see smelt jumping out of the water as you fight a bass or walleye in shallow water, you know that most of the gamefish are very well fed and are often full. You would be surprised at how often that fact is lost upon visiting anglers.

So, No, the big walleyes aren’t jumping into the boat as we drive by. They are being caught at an unbelievable pace by guests who are fishing hard with their guides as they work through the hundreds of changing variables each day.

The big jig and Gulp bite was a major source of production for big walleyes this week. We did also turn many big eyes on the deep side of the weeds with 1/8 oz. jigs and minnows. Most walleyes were caught between 6 – 12 ft. of water, but on the tough bite days, there were walleyes caught in 4 ft. and 34 ft.

During flat water and bright sunshine, many of the guide boats turned to bass and pike for production and were successful based on the time invested. Bass production was very good with many boats reporting 20 – 40 bass per day over 16 in. For the week we had 25 over 19 in. and 3 over 20. Tubes and cranks turned many bass, but topwater was a big producer this week.

My background in science compels me to talk about stats, year classes, and production. At the same time, I preach to my crew that 50% of their job is customer service. In the list of what was caught and released, the best family fishing stories are lost. My personal highlights this week were handing out master angler pins to the Tjaden and Buckenberger families.

Kay Tjaden caught a 28 and a 29.5 in. walleye this week. At check out, she told me that she really wished that one of her grandson’s had caught the big one. I respectfully disagreed and was very happy that Tyler had a great photo of her big fish to post this week.

Ron Buckenberger caught a big 41 in. pike while pulling Gulp for walleyes, but his grandson Jack caught a MONSTER 43.25 in. pike fish of a lifetime to top off the family fishing week.

It was once again, another great fishing week in the central basins of Lac Seul, however there were very many peaks and valleys. Not every guest in every group caught a huge fish, but they had their chances. Most did, but those that didn’t know that they were fishing big fish water with cutting edge tactics and technology. My closing speech at tonight’s guide round table was focused on the balance between managing expectations with the strategies to motivate guests to apply the effort required to chase big fish. Our meeting ended with my advice to my guide crew to take a step back and truly enjoy how many big walleyes we get to put in the boat. At the same time, I reminded them that we all need to provide the mature overview of just how fortunate we are to be chasing another peak-year class of walleyes.