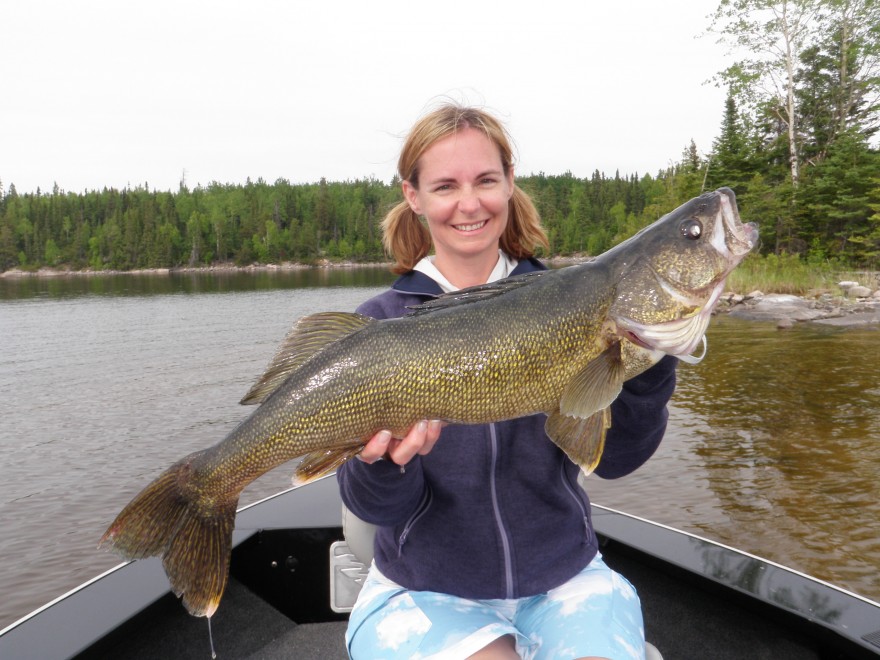 The fishing this week was epic. And I do not say that lightly. Every report this year has yielded results that exceeded my expectations based on the weather and fishing conditions. This week was no exception, except now I am starting to believe that “the good ole days” may be back again. The difference is that we now know how to appreciate them.

For those that have not followed along with our fishing reports and studied the trends of our production over time, I will digress and tell a brief story that most of my long term guests already know. Just a few years after I purchased Silver Water Wheel in 1998, we experienced several seasons of back to back, unbelievable walleye fishing. Those years helped me get on my feet, fill the lodge, and establish The Wheel as a destination adventure for Trophy walleyes combined with great customer service.

The mistake that I made during that time was that I did not realize that we were riding the crest of a couple of great walleye year classes that grew up during excellent growing seasons and instead, attributed our fishing success to high quality guiding. We were doing a good job, but instead of patting ourselves on the back, we should have been advising our guests that this was an anomaly that would eventually wind down over time. And it did. The lesson was learned and we began to watch for the next wave. You can go back through the years and all of the weekly reports on this site and track the progress of the year class of fish that we are now chasing. I am again surprised at how quickly they have kicked in, but it is hard to argue with this week’s production.

As usual, it is very late and I did not go back and look up the actual stats from all of the seasons, but I can only remember one week back in the peak of big walleye production when we caught 100 walleyes over 27 in. in one week.

For the week, we caught and released 90 walleyes over 27 in., including 23 – 28s, 4 – 29s, and 2 – 30s. Daily guide reports averaged 40 walleyes per boat, per day over 18 in. and the highest daily total was 78. I try to always state our stats in a matter of fact style. Good or bad, no matter, “this is the way that it was.” It is hard for me not to find a silly emoticon or at least add an exclamation point, but Again, this week was OFF THE CHARTS for big walleye production.

Surprisingly, the big fish numbers were split between the end of the spring locations, the peak of transition spots, and even a few big fish from summer locales. The guides were aggressive in chasing down the bites this week and I was surprised at the end of the week at how diverse the areas were that turned big fish. The one trend of note is that big plastics selected for big fish. There were several different bites that hinged on big plastics and Gulp Alive Minnows and Crazy legs jerk shads on ¼ – 3/8 oz. jigs.

The advantage of working the big jigs and plastics fast first, is that you can watch your electronics and isolate areas to gear down and slow down with live bait later. If you are fortunate enough to guide on a high quality fishery, your next challenge as a guide is to increase your productivity by increasing your efficiency. You can gather 100 times more information pulling Gulp at 1.3 mph than you can dead sticking 1/8ths over 1 or 2 arcs. The information gathered is the fuel for that day’s fire. If the fish are aggressive, you can continue to cover ground and catch them as fast as you can with Gulp. If the fish are neutral to negative and you pull Plastic by 15 – 20 arcs without a bite, then it is time to mark those areas and slow down with live bait.

We apply the same efficiency approach to pike and bass as well, but when the walleye fishing is this good, it really is tough to try to convince your guests to chase them. Smallmouth Bass are moving into the shallows and the bite has been good. Some areas have warmed more slowly than others and our overall volume of bass is down because of the time spent chasing walleyes, but the big bass numbers are still good. For the week, we had 20 – 19s and 6 – 20s. Tubes and topwaters were top producers

Incredibly, there were groups that chose to take time to fish for pike despite the hot walleye bite and they also did quite well for the time they spent. For the week we had 14 over 37 in., with 3 – 40s and 2 – 41s.

When I begin the weekly fishing report stating that walleye production was “epic,” it does require some context. I can vividly remember guiding on another nearby lake and my guests told me that they had enjoyed the great fishing that day, but it still wasn’t as good as the walleye fishing they had seen on Lac Seul. I was ticked off until I experienced the Lac Seul walleye fishery and then I understood the standard. For the first few years that I owned the lodge, big walleye production was so huge that In-Fisherman magazine changed their benchmark for Master Angler Awards from 29 in. to 30 in., because of the number of submissions from Lac Seul. In that context and with that history, this week was awesome for Big walleye production and it shows no sign of slowing down.