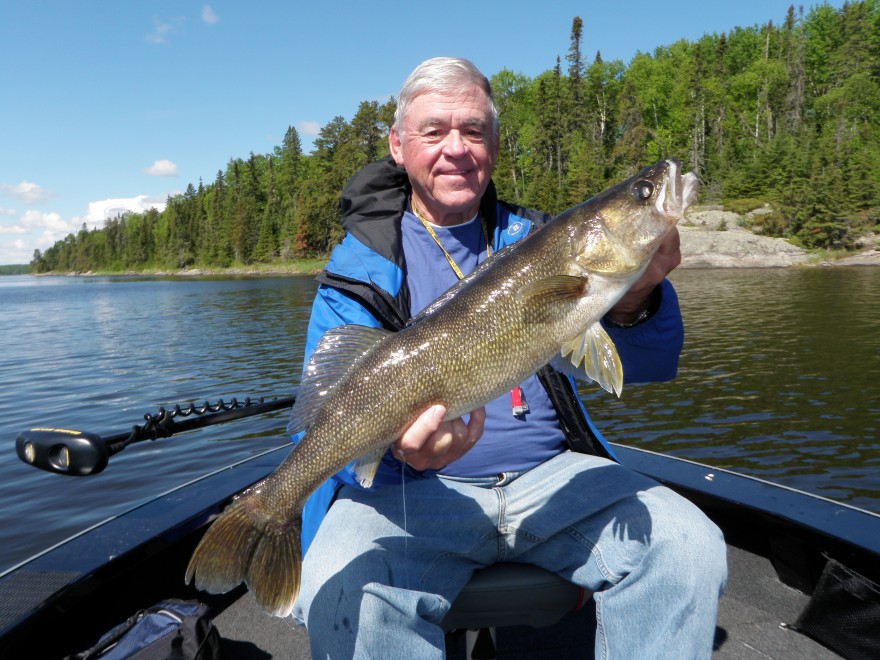 Missy was talking tonight to Alex (20) and Nick Sigurdson (23). They have been fishing at the Wheel with their dad Dan for the past 15 years and they agreed that this was the best weather and best fishing that they have ever had. The same comments were repeated again and again at each of my check-outs and the stats chime in even louder. I was surprised at how good last week was for big fish. I am shocked at how much better this week was for big fish, plus volume. Over the years, my lead guide Brett McCallum has seen it all and his conclusion is that it can’t last, but right now, it is as good as it gets at Silver Water Wheel…. Walleye full on, Big pike on, and Big bass just starting.

There were a few slow mornings in certain areas and a few disappointing runs to normally productive spots, but on balance, this week was as good as we have seen in the past 7 years. For the week we had 54 walleyes over 27 in., including 13 – 28s, 7 – 29s, and 1 – 30. Walleye volume was excellent as well with daily guide sheets averaging 35 walleyes over 18 in. The highest daily total was 80.

About half of the big walleyes were caught on 1/8 oz. jigs and minnows and half on jigs and plastics or gulp Alive minnows. With water temps averaging 60 degrees F all over the lake, we have quickly moved into transition. We still caught some big eyes way back in the retro spring spots, but there were just as many big ones caught from the deep side of main lake transition spots. I think that one of the big differences we are seeing in production is the universal aggressive approach that all SWWL guides take to searching water and hunting for big fish. No one is happy sitting and catching a bunch of “littles.” You can do that anywhere. The guide crew in general and the freshman crew in particular are aggressive at searching for big fish bites.

We also had many groups actively chasing pike this week. For the effort applied, the results were equally impressive for pike as they were for walleye. For the week, we caught and released 23 pike over 37 in., including 5 – 40s, 1 – 41, 1 – 43, and 1 – 44. The weed beds are about ½ way up in transition areas and almost to the surface in the back water bay areas. I had no idea that the spring could progress so quickly after such a late ice out, but 14 days of warm sunshine has been the key.

Bass fishing is also now right on schedule after a full week of bright warm sun on the shallows. Some bass are on beds in Burntwood and they soon will be in Bray. I took Brooke (8) and Blake (6) out fishing tonight for an hour. We fished random shorelines with rocks and sand transitions and caught bass off all of them. Brooke’s biggest was a 19. For the week we caught and released 16 – 19s and 1 – 20. The next 2 weeks will be the peak of Bass fishing season.

The most difficult thing about being the guide manager and owner of SWWL is trying to objectively balance guide production and staff performance with guest expectations. When we smash it, we want to take credit. When we get beat up, we want to blame the weather. In between is the transition from old guides to new, training and coaching, and lengthy nightly round tables combined with evening advanced training. I encourage my senior guides to push the new guys. And I keep track of everything. This week, one of my first year guides reported the following walleye catch: 25s – 11, 26s – 5, 27s – 7. I had walleyes at 25 – 12, 26 – 6, and 27s – 8. My return guests know that it doesn’t matter who you fish with. The information is shared across the board and the training program is now so intense that first year guides know that they are expected to keep pace with senior guides. That new program has paid off in a big way. Jesse and I agreed that it felt awkward to be talking about transition and production during our “iced in seminars” in the lodge this spring, but the results are real.

I know that it is going to end, but this past week has been a fun one for me. Pete Bloom has been fishing at Silver Water Wheel Lodge for 33 consecutive years. I had the pleasure of putting the net under a 27, 27, 27.5, 27.5, and a 29 inch walleye this week for him. He and I both know that this is the “Good ole days” and that we will talk about this past week for years to come.

I am 45 this year and am admittedly in between generations. Having the young guns around keeps me sharp and up to date and one of the things that I am most proud of this week is our new video on You tube. Jesse Wright has been and will be the key to this project. He introduced me to the “Go Pro” video camera and showed me his first Wheel video. I saw the potential, bought my own camera, and have been working with him to produce new, current , and fun videos to better show what it is actually like to fish at the wheel. The first clip of the year is now uploaded to let you get a feel for the Spring of 2013. I knew it was good when I got excited watching it even though I was here when it was filmed…. I Know you will enjoy it. Even though we are exhausted, we are planning many more to come….