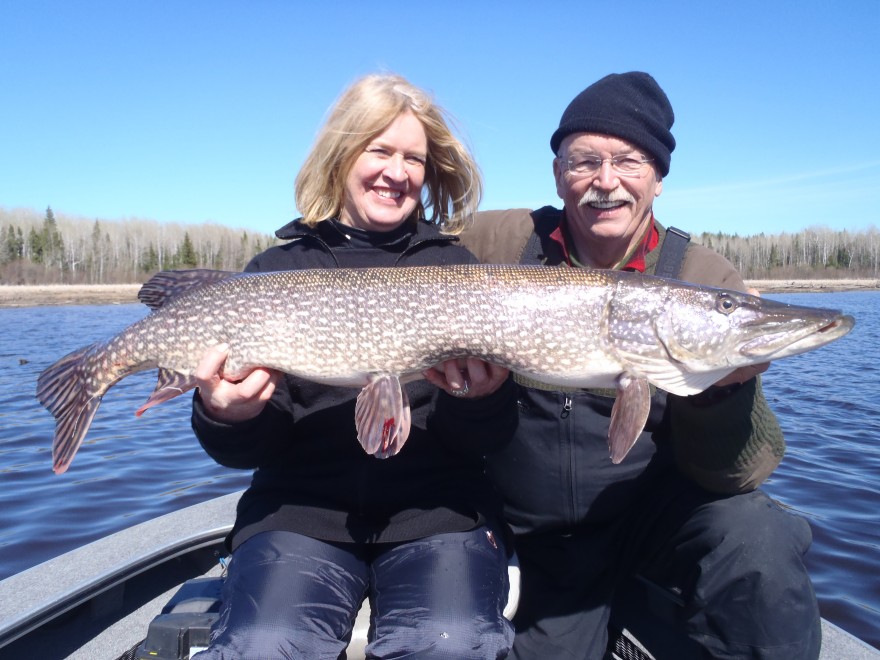 For those that have been patiently waiting for a new round of SWWL fishing reports to begin, I do apologize, but it has been a rough start. I just reread my first fishing report from 2012 and compared to this year, it reads like “Bizarro World.” The easiest way to begin to describe how dramatically different two years can be:

You can still find 4 -5 ft. piles of ice on main lake islands right now. I had to hire a D7 bulldozer to plow snow to get into the lodge on April 27. The 7 ft. pile of snow and 4 -5 ft. snow drifts took weeks to melt. And all of those terrestrial details don’t even begin to do justice to how different the fishing has been between the two openers.

I cancelled my first week groups this year because of ice. The Wooge group of 4 arrived on May 19 and suffered through some of the worst possible fishing conditions you can imagine. The ice went off the lake earlier than it could have with a massive cold front, packing sustained 30 – 40 mph winds and rain. Nothing says lock jaw more than a post cold front ice out.

We did catch a bit of a break when weather conditions improved dramatically as the lodge almost filled up on May 22. Main lake temps were 40 and the back bays struggled to get to the low 50s, but that was enough for us to begin to scrape together some patterns.

As usual, when faced with difficult conditions, the guides pooled their resources and came up with some creative solutions. Some walleye bites were very temporary and most were based on exceptionally shallow presentations associated with barriers and warm water.

Despite the few guests in camp and just ½ a week of sheets, we did manage to put together a surprising number of big walleyes. For the week we had 32 over 27 in., including 6 – 28s, and 3 – 29s. Despite the strong top end numbers, it is hard to describe how few areas produced walleyes, let alone big ones. It was feast or famine and even when we were doing well for big fish, it was often hard to find small fish to eat for lunch. One of the known patterns that we deal with on an early, early spring is that the big female river spawners disperse first. When they leave, they move to warm water and that is one thing that we find in relatively very short supply this spring. The result is that volume has been relatively very weak, yet we have seen some big fish.

Weather patterns have been warm and consistent over the last 4 days and the run up to a more normal spring season should accelerate.

Fishing conditions have been challenging, but I did just check out a group that I had tried to cancel. I had been concerned that the bite would be tough to find, but they reminded me that sometimes I tend to err too far on the side of caution. They experienced their best big fish week in years with 18 walleyes over 27 inches for 6 guys over 3 days. Shorelunch fish may have been tough to find, but some of our groups smashed the big ones this week.