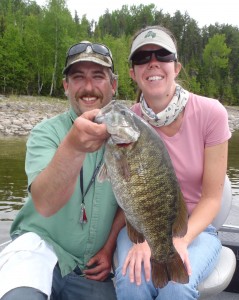 It was another extreme weather week on Lac Seul. The weekend began with a high pressure system that resulted in 5 days of brilliant sunshine and virtually no wind. Lake surface temps soared and the highest reading I found at 5:50 PM on Thursday was 79.2 and that was on the main lake. The result is that 29 in. walleyes were caught in 2 ft. of water on a pike spinnerbait and many small to medium sized walleyes were caught on main lake summer sand structure as deep as 35 ft. When the walleyes are scattered, windless conditions usually make for a tough bite and we did experience some slow afternoons. At the same time, these weather conditions did kick the Bass bite into high gear and the shallows filled overnight. It is already full on bass fishing season and the fish are bigger than last year.

The weather did break today with a storm that dropped over an inch of rain. The walleye bite today was as good as it gets with guide boats reporting as many as 20 walleyes over 24 in. Today’s bump helped even out some of the slower days earlier in the week and we finished with 33 walleyes over 27 in., including 8 – 28s, and 2 – 29s. It was once again a week where the daily average doesn’t mean much, because when the walleye bite was tough, the guides went bass fishing and when the walleye bite was on, they stacked them. Overall total guide sheets averaged 35 fish per boat per day.

There was some time spent chasing pike this week and results were fairly good. With the crazy early season, the pike are definitely scattered across the lake. With several days of blazing sunshine, we did see the bait fish move shallow and many pike followed including the big ones. Surprisingly, the weed beds are at the surface in the back bays and are already 2 – 3ft tall in 5 -8 ft. of water on the main lake. These early summer or late spring spots produced 12 over 37 in., including 3 – 38s, 1 – 39, 1 – 40, and 1 – 42.5.

The bass bite was not so surprising. With the sky rocketing surface temps, the bass moved into the skinny water in mass. We stopped counting bass over 17 in. because the number was ridiculous. For the week we had 123 over 18 in., including 32 – 19s, and 4 – 20s. Cranks, jigs and twisters, and topwaters all turned some fish, but tubes were by far the most effective for the big ones.

When I reviewed the annual stats from last year, I was surprised to learn that 2011 was the peak production year for Bass over 18 in., bass over 20 in., pike over 40 in., and yet was also within 50 fish of being the top year for walleyes over 24 in. From an operations stand point, something should give. If you are chasing bass, your walleye numbers should go down. If you are spending time hunting big pike, then your walleye and bass numbers should suffer. This week was a perfect example of how the guide crew has managed to maximize production across the board over the last few seasons. When the walleye bite is tough, we shift gears and fish bass or chase gators. The deeper our information base becomes, the more we choose to offer our guests more flexible options that tend to result in better overall seasonally adjusted production. The weather is always going to be a factor and more often than not, it is going to be extreme up here, but as a group, we have learned to adjust and maximize our results.